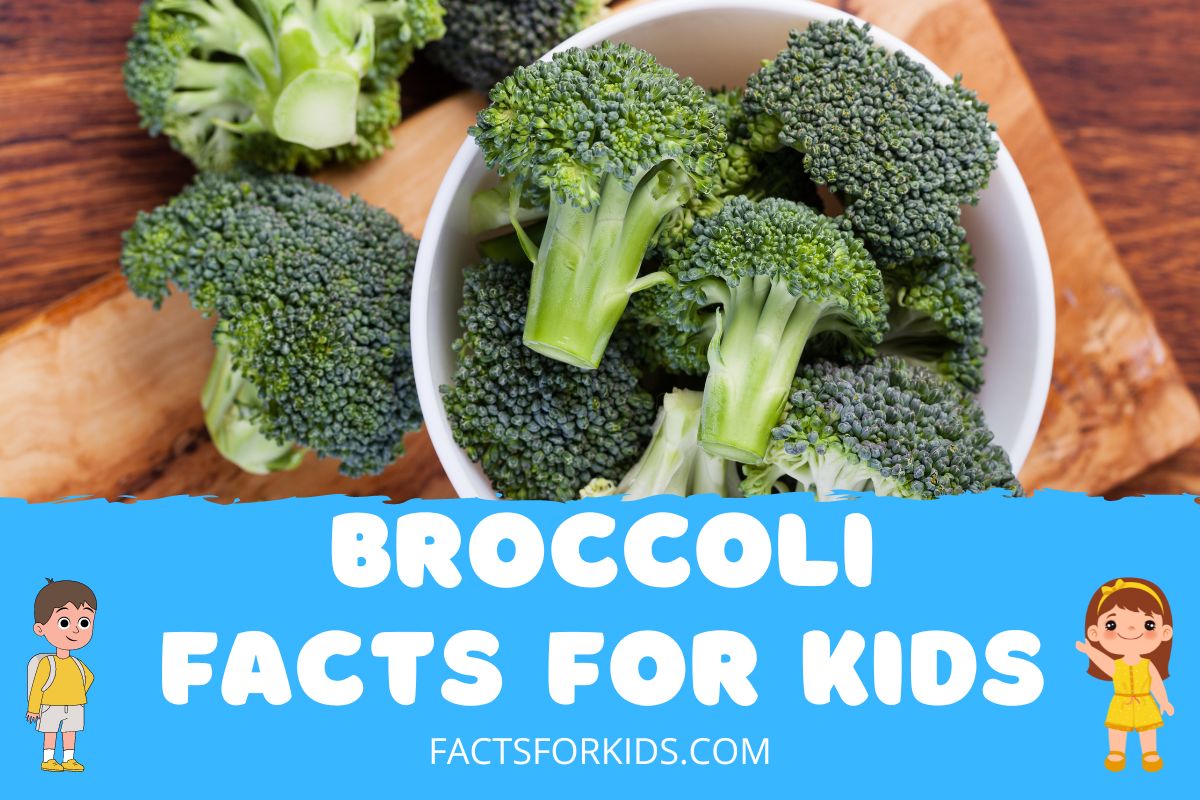 What looks exactly like cauliflowers but is greener and tastier? You’ve guessed it right; we’re talking about Broccolis, the superfoods of the cruciferous family. Broccoli is a good source of dietary fiber, vitamin C, vitamin K, and several other nutrients. It also contains phytochemicals that may have health benefits. Kids who eat broccoli tend to have better nutrition and overall health.

Broccoli is a great vegetable for kids to learn about. Therefore, in this article, we’ll share with you some brilliant broccoli facts that will teach you everything you need to know about this vegetable. Let’s get started!

Contents show
1. The term ‘Broccoli’ has Italian origins
2. There are three varieties of broccoli
3. Broccolis are healthier than cauliflower!
4. Broccolis are hand-harvested vegetables
5. China is the leading producer of broccoli in the world
6. Broccoli Rabe isn’t actually broccoli!
7. Purple Cauliflower is actually a broccoli variety!
8. People with Thyroid shouldn’t eat broccoli!
9. Broccolini isn’t baby broccoli, even if it’s called that
10. California is the leading broccoli-producing state in the United States
11. Calabrese Broccoli is the most common broccoli variety in the United States
12. President George Bush wasn’t a fan of broccoli

1. The term ‘Broccoli’ has Italian origins

Haven’t you ever felt curious about what the term broccoli means? Well, we’re here to answer your question. The English term broccoli originated from the Italian term broccolo, which translates to the flowering crest of cabbages in English. Quite befitting, don’t you think?

2. There are three varieties of broccoli

While you might find countless varieties of broccoli in the supermarket, all of them find their way back into three broader categories: Calabrese or Heading Broccoli, Sprouting Broccoli, and Purple Cauliflowers.

3. Broccolis are healthier than cauliflower!

Because of the similarities in the appearance of cauliflowers and broccolis, people often compare their nutritional values. If you’ve ever wondered about the same, here’s your answer:

Although the nutritional value of both these cruciferous vegetables is more or less the same, there’s one significant difference: their Vitamin K content. The content of Vitamin K present in broccoli is equivalent to 77% of the DV (daily value), while in cauliflowers, it’s just 14%.

This makes broccolis healthier than cauliflowers. However, we encourage you not to choose one over the other but eat both in moderate amounts. 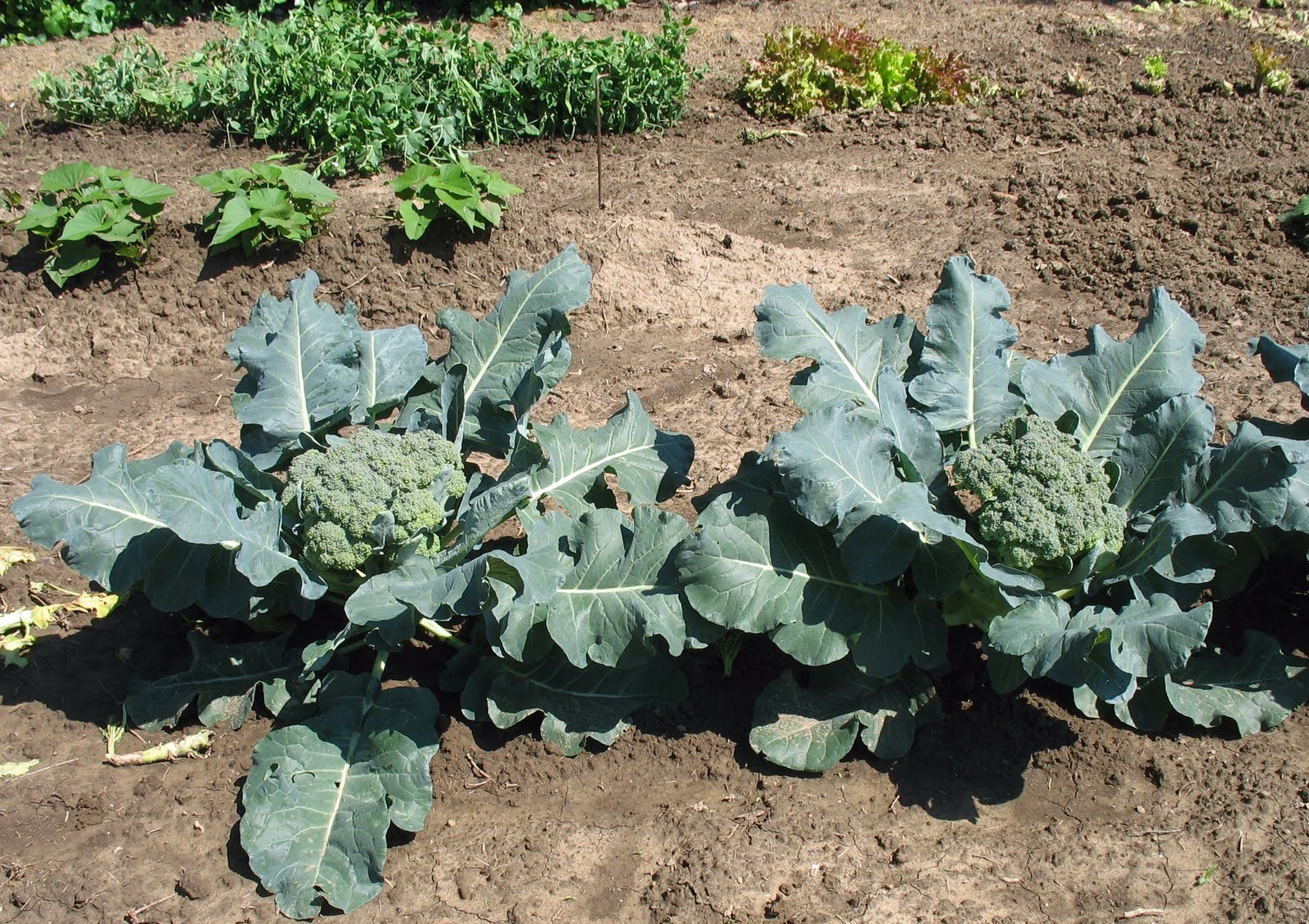 While most vegetables are harvested mechanically, broccolis are still hand-picked the old-fashioned way. This is because the mechanical harvesting of these veggies poses a threat to the delicate broccoli heads.

Furthermore, hand-harvesting broccolis isn’t as laborious as you’d think, either. Because broccolis grow on plants that are generally 2.5 feet high in length, the farmers needn’t bend down to pluck them and can simply walk through the beds with a storage container.

5. China is the leading producer of broccoli in the world

Although broccoli is widely cultivated in many different parts of the world, over half of the total broccoli production can be attributed to China.

India and the United States closely follow China in the production of these vegetables; together, China and India account for 75% of the global broccoli production. It’s no surprise that these three countries also happen to be leading broccoli consumers.

Rapini, which is also referred to as Broccoli Rabe, is often confused for a broccoli variety due to their common name. But while these vegetables belong to the cruciferous family and are, therefore, related to the broccolis, the two aren’t the same.

It is just because the buds of rapini appear like tiny broccoli heads that they’re named after them.

Have you ever seen a purple cauliflower and found it odd? We’re here to disclose that while these vegetables are not cauliflowers at all but a broccoli variety instead. They’re cultivated primarily in Europe and North America and are a popular addition to salads.

But why are these broccolis purple and not green like regular broccoli? It is the presence of anthocyanin in these vegetables that makes them purple. Anthocyanin is an antioxidant that is also responsible for the coloration of wine and red cabbages.

Does anyone in your family have Thyroid? If they do, you must warn them to stay away from broccoli, or any other cruciferous vegetable for that matter, and here’s why:

Research shows that the process of digesting cruciferous vegetables can interfere with your thyroid’s ability to use iodine. However, eating these veggies cooked and in moderate amounts occasionally is completely safe.

9. Broccolini isn’t baby broccoli, even if it’s called that Broccolini is just another cruciferous vegetable that’s often confused with broccoli, although the two appear nothing alike, except for broccoli-like but smaller florets on it. It is probably for this resemblance that they’re called baby broccoli.

This vegetable is actually a hybrid between broccoli and Chinese kale, with their stems, flowers, leaves, and buds all being edible.

10. California is the leading broccoli-producing state in the United States

As we discussed earlier, the United States ranks third on the list of broccoli-producing countries in the world. But do you know which state of the nation has played a key role in putting it third? It’s California. California accounts for over 90% of the total broccoli production in the country and is, therefore, the leading broccoli-producing state.

11. Calabrese Broccoli is the most common broccoli variety in the United States

What would you say if we asked you to describe the broccoli that you commonly eat at home? Bluish-green coloration, medium-sized, fuzzy heads, and a thick, fibrous stalk: is that right?

George H. W. Bush, the 41st President of our country, wasn’t a fan of broccoli. In fact, that might seem like an understatement, as the President clearly stated in one of his interviews how much he had hated the vegetable all his life. Bush even went ahead and banned broccoli from Air Force One!

With this, we’ve come to the end of our article. In it, we’ve covered every interesting broccoli fact that you might want to know, right from the history of the term to the fowl opinion one of our ex-Presidents had about it.

Whether you are getting some friends or family members excited about eating their vegetables or if you know someone who has a child struggling with health issues, we just hope this will give everyone something to think about. It is important for everyone – but especially youngsters – to make informed choices about what they put into their bodies and how best to fuel them toward better health.

30 Orange Facts For Kids To Blow Their Socks Off

27 Lemon Facts for Kids and Their Curious Minds

24 Pineapple Facts For Kids That Will Surprise You