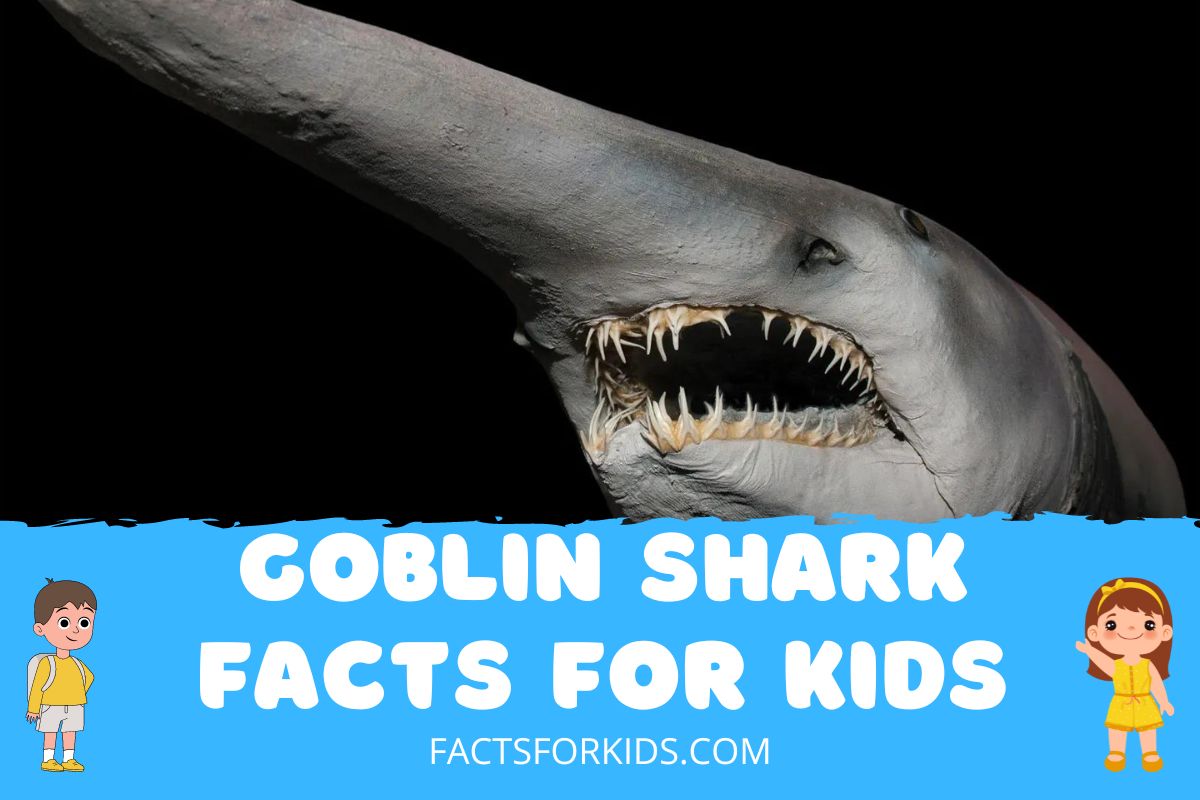 Have you ever heard of a goblin shark? These strange and mysterious creatures are some of the most unusual sharks in the ocean! With their long, slender snouts and pinkish-gray skin, goblin sharks are a sight to behold. But there’s so much more to these deep sea dwellers than meets the eye. In this blog post, we’re diving into lots of fascinating facts about goblin sharks for kids. From their unique anatomy to their elusive behavior, there’s plenty to learn about these amazing animals.

So grab your diving gear, and let’s dive in!

1. Goblin sharks are a type of deep-sea shark.

Goblin sharks are a type of shark that lives in the deep sea, which is the very bottom of the ocean. The deep sea is a dark and mysterious place that is very hard for humans to explore. It’s so deep that most of it is still a mystery to us!

But goblin sharks are perfectly adapted to living in this deep, dark environment. They have special features that help them see and catch prey in the low-light conditions of the deep sea.

Goblin sharks are found in the waters of the Atlantic, Pacific, and Indian Oceans. They are most commonly found at depths of over 3,000 feet, which is much deeper than most other sharks can go. They are one of the few animals that can survive in the extreme conditions of the deep sea, where the water is very cold, and there is very little sunlight. 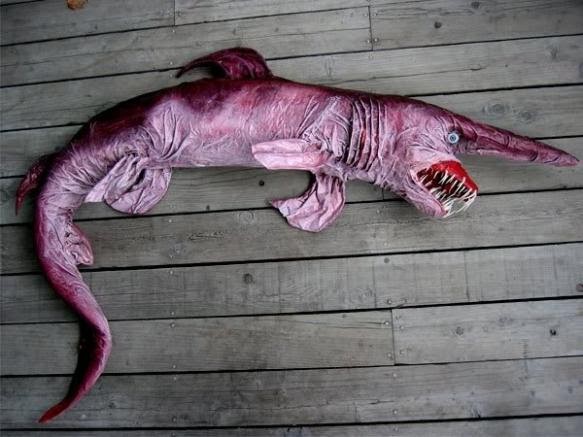 Their skin is thin and delicate, and it is loaded with blood vessels that are clearly visible through the skin. This gives goblin sharks a distinctive pinkish color that is unique among sharks.

While the pink color of goblin sharks is often associated with their blood vessels, it’s important to note that the color can vary somewhat depending on the lighting conditions and the angle at which the shark is viewed.

Some people have described goblin sharks as having a pinkish-gray, salmon, or peach color, while others have described them as being more red or orange in color.

3. Goblin sharks are sometimes called “living fossils” because they are as old as dinosaurs.

Dinosaurs are a group of reptiles that lived on Earth millions of years ago. They were some of the largest and most diverse animals to have ever lived on our planet, and they ruled the land, sea, and sky for millions of years. However, dinosaurs went extinct about 65 million years ago, so they are not around today.

Goblin sharks, on the other hand, are still alive and well! They live in the deep sea and are considered a rare and poorly understood species. Because they have been around for such a long time and have not changed much over the years, they are sometimes referred to as “living fossils.” This means that they are a living reminder of the ancient past and can provide scientists with valuable insights into the evolution of sharks.

Goblin sharks are a type of deep-sea shark that are known for their long, slender bodies and small size. They are not as large as some other shark species, such as great white sharks or whale sharks. In fact, goblin sharks are considered to be medium-sized sharks, with an average length of about 10-13 feet (3-4 meters). They can weigh over 450 pounds, which is about the same weight as 2 full-grown adult humans.

Despite their small size compared to some other sharks, goblin sharks are still impressive animals. They have a unique anatomy and behavior that sets them apart from other sharks. They have a long, flat snout and small, sharp teeth, and they are able to protrude their jaw out of their mouth to catch prey.

5. Goblin sharks are found in deep waters worldwide, but they are most commonly seen around the coastal waters of Japan.

Goblin sharks are a type of shark that lives in the deep sea, which is the very bottom of the ocean. They are found in the waters of the Atlantic, Pacific, and Indian Oceans, which means that they can be found in many different parts of the world.

It’s not entirely clear why goblin sharks are more commonly seen around Japan, but there are a few theories. Some scientists believe that the currents and temperature of the water in this region may be more suitable for goblin sharks, while others think that there may be more food available for them in this area.

6. They are slow-moving sharks and prefer to wait for prey to come to them.

Goblin sharks are slow-moving sharks that prefer to wait for prey to come to them rather than chase them down. This means that they do not swim around very quickly or aggressively hunt for food as some other shark species do. Instead, they tend to be more patient and wait for their prey to come within range.

One reason that goblin sharks might be slow-moving is that they live in the deep sea, where there is little light, and the water is very cold. In these conditions, it is not easy for animals to move around quickly, and it is important to conserve energy. Goblin sharks might also be slow-moving because they have small eyes and poor vision, so they rely more on their sense of smell to find food.

Despite their slow movement, goblin sharks are still powerful predators. They have sharp teeth and a long, flexible jaw that they can protrude out of their mouth to catch prey. They primarily eat fish and squid, and they are able to sense when their prey is nearby.

7. Goblin sharks have multiple rows of sharp teeth in their jaw. 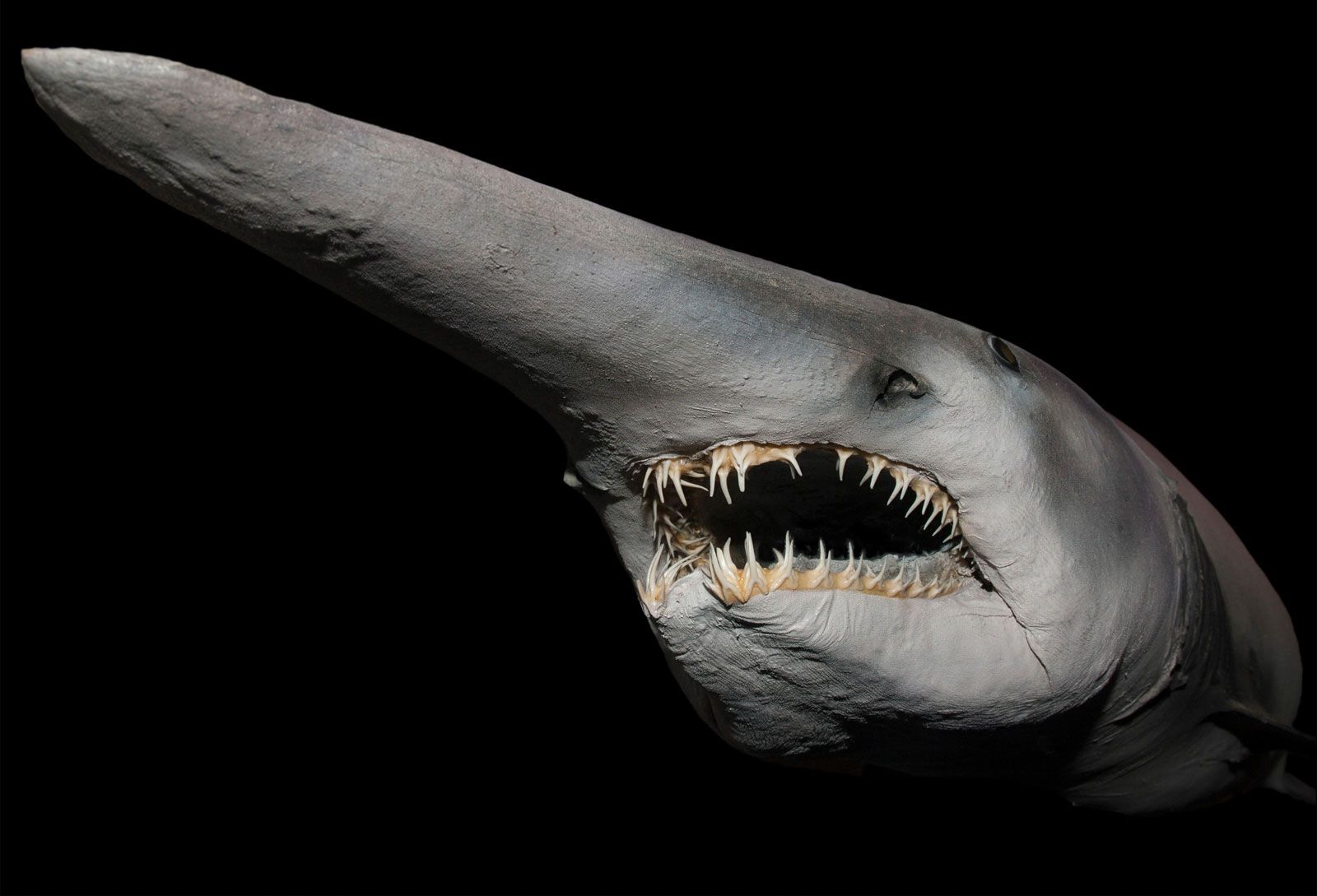 Goblin sharks have multiple rows of sharp teeth in their jaw, which helps them catch and eat their prey. The upper jaw of a goblin shark contains anywhere between 35 and 53 rows of teeth, while the lower jaw has 31 to 62 rows of teeth.

Their teeth are pointy, which helps them “spear” their prey rather than crush it. Goblin sharks are known to swallow their prey whole rather than bite off small pieces to eat.

8. They are not considered a threat to humans, as they live in deep water and are not aggressive.

Goblin sharks are a type of deep-sea shark that is found in oceans all over the world, but they are most commonly seen in the Pacific Ocean. They live at depths of up to 4,000 feet (1,200 meters), which is much deeper than most other shark species. Because they live in such deep water, they are not often encountered by humans and are not considered a threat to people.

In addition to living in deep water, goblin sharks are also not aggressive animals. They are slow-moving and prefer to wait for prey to come to them rather than chasing it down.

9. Baby goblin sharks are born with sharp teeth and are able to hunt for themselves right away.

Goblin sharks are a type of shark that gives birth to a small number of offspring at a time. They do not have many babies at once as some other animals do, and it is thought that they may only give birth once or twice in their lifetime.

Baby goblin sharks are very small when they are born, and they are completely independent from the moment they are born. They do not receive any care or protection from their mother and must fend for themselves in the deep sea. They are born with small, sharp teeth that they use to catch and eat fish and squid, which are their primary prey.

10. Goblin sharks have a lifespan of about 60 years.

Goblin sharks are a type of shark that can live for a long time. Scientists estimate that they may have a lifespan of around 60 years which is longer than many other shark species.

However, it’s important to note that we don’t know for certain how long goblin sharks can live, as they are a deep-sea species that is hard to study. They live at the very bottom of the ocean, which makes it difficult for scientists to observe them and learn about their behavior and ecology.

Despite this, we do know that goblin sharks are a slow-growing species that take a long time to reach adulthood. They have a slow reproductive rate, which means that they don’t have many babies at once as some other sharks do.

11. Goblin sharks have a special organ called “ampullae of Lorenzini” that helps them detect electrical vibrations in the water. 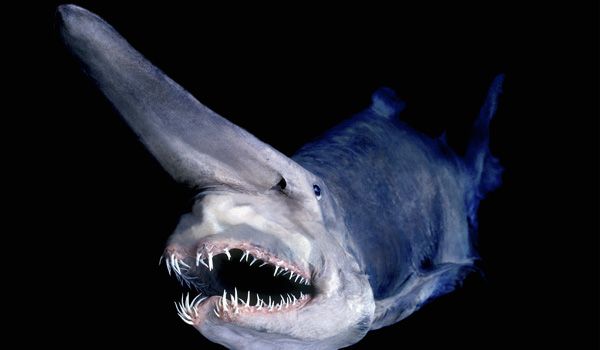 Goblin sharks have a special organ called the “ampullae of Lorenzini” that helps them detect electrical vibrations in the water. This organ is located in its snout and consists of a network of small, jelly-filled tubes called “electroreceptors.”

This ability is especially useful for goblin sharks, as they live in the deep sea, where it is very dark and hard to see. By detecting the electrical fields of other animals, goblin sharks can find prey even when they can’t see it.

12. Goblin sharks are ovoviviparous, meaning they give birth to live young that hatch from eggs inside the mother’s body.

Goblin sharks are ovoviviparous, which means that they give birth to live young that hatch from eggs inside the mother’s body. This is different from some other animals, which lay eggs and then leave them to hatch on their own.

When a female goblin shark is ready to have babies, she will lay eggs and then carry them inside her body. The eggs are fertilized by the male goblin shark and will hatch inside the mother’s body. Once the babies are fully developed and ready to be born, the mother will give birth to them.

In 2003, more than 100 goblin sharks were caught by fishermen around the coast of Taiwan. This happened just after a large deep sea earthquake. This was a rare and unusual event, as goblin sharks are a deep-sea species that is not often encountered by humans.

Some scientists believe that the earthquake may have caused the goblin sharks to become disoriented or to swim closer to the surface, where they were more likely to be caught by fishermen.

14. Goblin sharks are a mystery to scientists, with much still unknown about their behavior and ecology.

Goblin sharks are a type of shark that is found in the deep sea, which is the very bottom of the ocean. The deep sea is a very dark and mysterious place that is hard for humans to explore, and as a result, there is still a lot we don’t know about the animals that live there.

Goblin sharks are a particularly mysterious species, as they are rare and not much is known about their behavior or ecology. They are a deep sea species that is hard to study, and as a result, we don’t have a lot of information about how they live and interact with other animals in their environment.

Despite this, scientists are working hard to learn more about goblin sharks and their place in the marine ecosystem. They are using a variety of techniques, including underwater cameras and satellite tracking, to study these amazing animals and learn more about their behavior and ecology.

By continuing to study and learn about goblin sharks, we can help to protect these fascinating and mysterious creatures and ensure their survival for future generations.

16 Anaconda Facts for Kids That Are Sure to Impress

22 Jellyfish Facts for Kids that will Blow Your Mind

14 Narwhal Facts for Kids to Impress Their Friends