Specially termed as “charismatic megafaunas,” scientists consider Llamas as one of the few species of animals that can easily allow humans to hug them safely. Ask anyone about these slender-bodied, short-tailed, hairy animals, and you will receive nothing but praises about them.

Their gentle and friendly behavior is one of the many reasons why these animals are so popular among humans. But there is so much more to these animals that make them stand out from the rest.

Here are some amazing facts about Llamas that will definitely spark your interest!

Contents show
1. Llamas and camels are “cousins”
2. Llamas are smart
3. Llamas communicate by humming
4. Llamas make the best livestock guards
5. Llamas make a great babysitter for baby lambs
6. Llamas have fangs
7. Llamas poop in certain spots
8. Llamas poop doesn’t have a foul odor
9. Llamas don’t bite; they only spit
10. Female Llamas remain pregnant for almost 50 weeks
11. Llamas come in a variety of colors
12. Llamas and Alpacas are different from each other in many ways

1. Llamas and camels are “cousins”

Yes, you read it right! Llamas are the South American cousins of camels. Llamas and camels both belong to the Camelid family, a unique group of tall-necked mammals that includes other animals like Alpacas, Guanacos, and different species of camels.

Though they share the same extended family, Llamas do not have the iconic humps like camels do, and neither do they live in hot and dry deserts. One could easily spot a herd of Llamas in the dry mountains of South America, specifically in Peru and Bolivia. 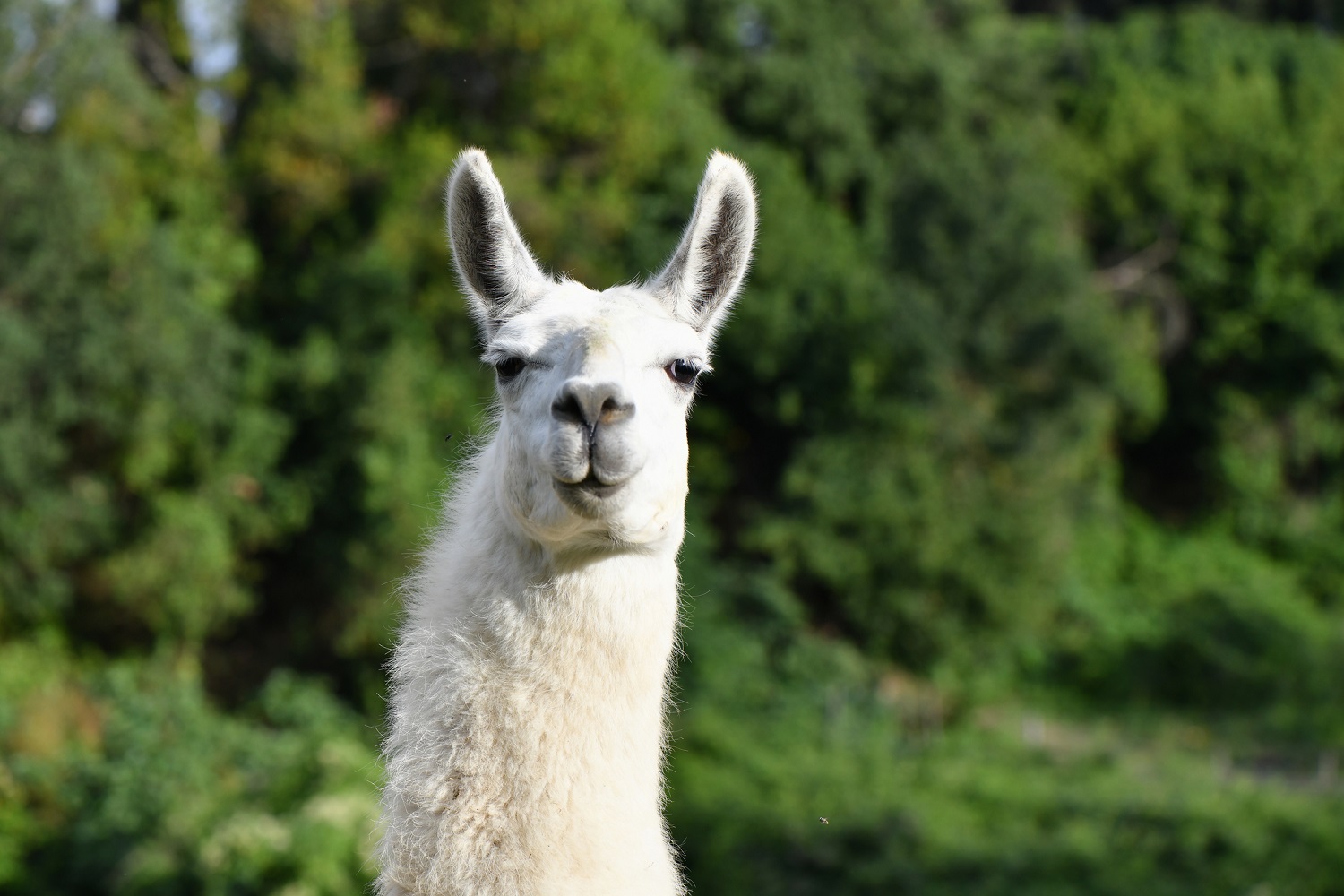 This shouldn’t come as a big surprise when considering their gentle and mild nature. They can easily catch up on human training and even take up a few quick tricks to please their human masters.

In fact, Llamas are becoming increasingly popular as pet animals, loved and cherished by humans and their society. Some scientists have even successfully taught them how to use mirrors. Not surprisingly, our wooly friends here have sincerely mastered every good lesson.

The overall communication mechanism of a Llama includes a variety of visual, auditory, and behavioral signals. One such model of communication is their humming sound.

While we accept that different animals have different communication styles, using a simple hum as a medium of expression still sounds like a unique way to communicate.

This special hum of a Llama has been compared with a cat’s purr and sometimes even with a human’s hum. Their hum varies in tone and volume to convey different emotions and feelings. They hum when they are tired or agitated and when they are about to give birth and greet their newborns. So a llama is basically all about humming and being lovable.

Llamas are quite social in nature and prefer to stay with other llamas or herd animals. They can even admit a group of sheep or goats as their own herd member and then faithfully guard these small animals by chasing off their predators.

Suppose a coyote or a dog gets into the pasture where the llama is. It will approach them with their head outstretched and attack them with their front feet, sometimes even directly killing these predators.

In fact, Llamas have long been used as livestock guards in North America since the 80s, and we are not in for questioning their guarding abilities.

As the mama sheep goes about the pasture looking for some fine pieces of grasses to graze on, the llama stands guard to look after the baby lambs.

The llama quickly detects the approach of a coyote and then promptly takes action by either alerting the keepers with a sharp shriek or launching a full head-on attack on the coyotes stomping them to their death. Talk to a random sheep rancher, and you will get to hear amazing bonding stories between Llamas and their adopted herd of sheep.

The best part about this fact is that the guarding spirit of a Llama is a natural instinct. They do not even require any training to be the best domestic guard; their protective nature simply runs in their blood.

Now, this fact came as a huge surprise, didn’t it? One might question why Llamas even have fangs when they don’t even go hunting. Well, these fangs are also known as fighting teeth that come in handy when these animals are dealing with their enemies, the canines.

The male Llamas usually grow these fangs between two and three years. They have two fangs on each side of the upper jaw and one on the lower. These are a razor-sharp pair of modified canine teeth that can surely leave anyone hurting and panting with serious injuries.

The female Llamas only grow their fangs later at four to five years. The female fangs are usually lower in size when compared to the male ones. Domestic Llamas usually have their fighting teeth removed in order to avoid causing accidents.

Unlike some other domesticated animals like sheep and cows who leave their poop scattered all over the place, llamas are real neat and specific when it comes to their poop. Many Llama keepers have noted their llama’s unique behavior of maintaining a special set of two or three pooty spots.

The llama will then keep going to these spots to take a dump, making gathering their poops for composting and gardening a much easier task for their keepers. The owners call these spots “dung piles” or “poop piles.”

A slightly funny but true fact. Llama poop does not stink at all. In fact, Llama poops are very useful as nutrient-rich and eco-friendly manure. Their poops are also burned as fuel. Llama owners even have a special name for Llama poops; They are popularly referred to as “Llama beans.”

9. Llamas don’t bite; they only spit

Take your chance to temper with a Llama’s mood, and they will leave you in a spitty mess. Yes, llama spits a good lot to express their dissatisfaction and anger. Although good-mannered Llamas do not spit at humans, they are all in when it comes to spitting their own kinds.

To make things easier for the other party, their spits at least come with a prior warning. They warn each other by raising their chins and directing their ears towards the back. After successfully issuing the warning, they don’t even think twice before discharging their spit onto the other llama.

Female Llamas also spit on a male to reject the male advances. A very cruel way of rejection when you realize the fact that llamas’ spit smells horrible. No one would want to take their chances with an irritated Llama’s spit.

A baby Llama takes a good amount of time to stay protected inside its mother’s belly. The mother Llama delivers this baby Llama, usually called “Cria” after a long pregnancy that lasts for about 350 days, only 15 days short of a year.

Twin birth is a rare occurrence in the case of llamas, and most of the time, the mother Llama usually gives birth to only one Cria at a time.

The newborn baby Cria weighs around 20 to 35 pounds, and they can even start walking after thirty minutes of their birth. A Llama usually matures at four years of age, and their average life spans only about 20 to 25 years.

11. Llamas come in a variety of colors

Llamas come in a range of solid, spotted, and two-toned colors. Their coat sometimes has a speckled appearance, similar to the coloration of some dogs. Their fleece comprises an outer layer of protective outer coat and an inner layer of insulating undercoat.

Their fleece is stripped off every two years, which generates a good 3 -3.5 kg of fiber. Raw Llama fleece usually sells at 5-40 dollars per pound and can be used to make knitwears, ropes, rugs, and woven fabrics.

12. Llamas and Alpacas are different from each other in many ways

A llama might resemble a lot with an Alpaca, so much so that you might not even be able to point out their differences at first sight. But they are actually quite different in a number of ways.

An alpaca usually weighs around 150 pounds, but a llama may roughly add up to 400 pounds, more than double the size of an Alpaca. Llamas are braver and more independent, and their faces look longer when compared with the blunt look of an Alpaca.

But due to being related through the same Camelid family, an alpaca and a llama can easily breed together to produce a fertile outspring called Huarizo.

We sure made ourselves fairly satisfied with a good dose of incredible Llama facts. There is quite an amazing side to these mild-natured overprotective domestic animals, and we loved every bit of amazing facts related to them.

There is more to llamas than the quite limited facts listed in this article. Llama also love dust-bathing, they have more than one way to express their unhappiness, including spitting, of course, and they are nowadays also being used as therapy animals.

The amazing facts related to these animals are simply unlimited. You can do your own special research around these facts and produce a good list of amazing facts about llamas. You can even start by learning a few more interesting facts about their other Camelid cousins while you are at it. This definitely sounds like a good research exercise before going to bed!

Otters are one of the most fascinating and creative animals in the world! They are furry mammals that live in both water and on land. Some live on land for long hours. And some like to float...

Let’s talk about goats. What kind of animals are they, what do they like the most, why do they have weird eyes, what are the different types of goats, and what makes them unique on their own?...