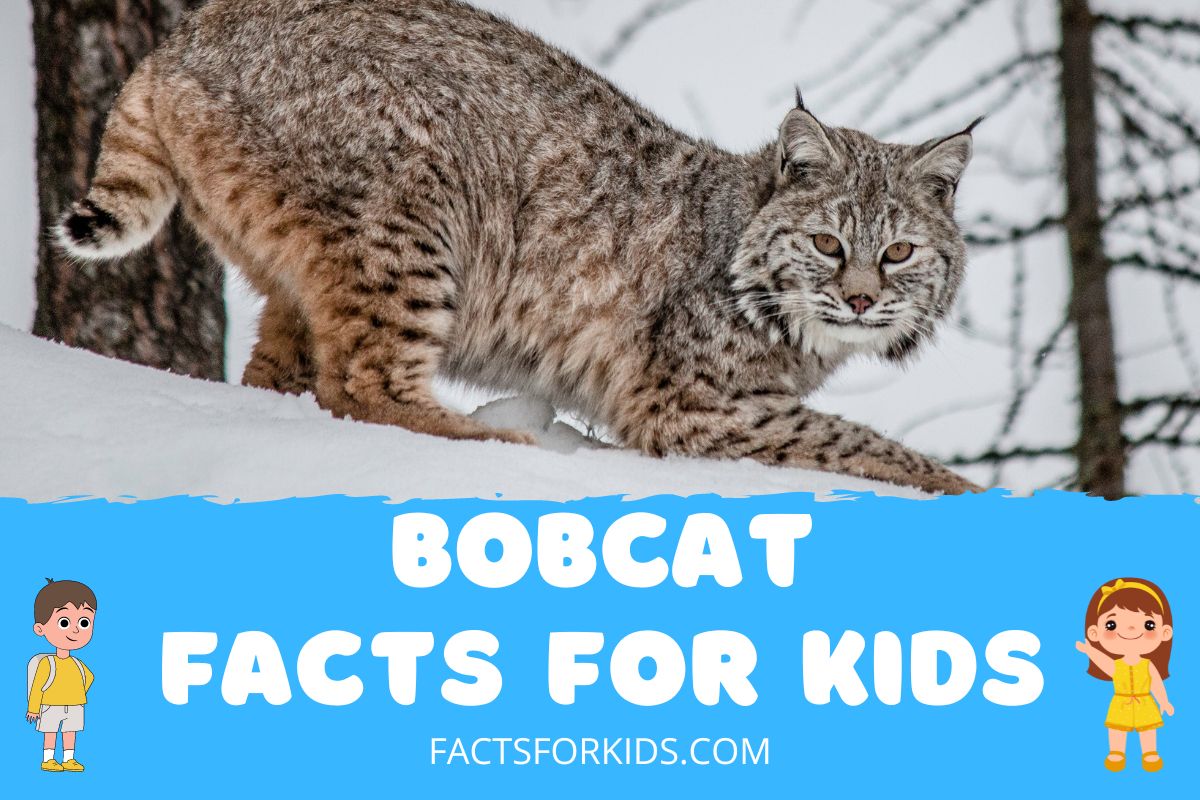 Bobcats are small, fierce, and fascinating animals that are native to North America. These wild cats are known for their powerful jaws, sharp claws, and distinctive reddish-brown coat with black spots. Despite their small size, bobcats are excellent hunters and are able to catch and kill a wide range of prey, from small rodents to larger animals such as deer.

In this blog post, we will explore a bunch of interesting facts about bobcats that will help kids to understand these fascinating animals better. From their physical appearance to their hunting abilities, there is much to learn about bobcats and their role in the ecosystem.

Contents show
1. Bobcats are small wild cats found in North America.
2. Bobcat’s scientific name is Lynx rufus, which means “red lynx” in Latin.
3. Bobcats have powerful jaws and sharp claws.
4. Bobcats are solitary animals and are rarely seen in groups.
5. Bobcats are great climbers and can easily climb trees.
6. Bobcats are skilled hunters, and they hunt during dawn and dusk.
7. The bobcat’s coat is reddish-brown with black spots.
8. Bobcats have excellent hearing, vision, and sense of smell.
9. Bobcats are territorial animals and will defend their territory.
10. Female bobcats are called ‘queens,’ and males are called ‘toms.’
11. Bobcats mate in the winter and have a litter of 1-6 cubs.
12. Bobcats are not endangered but are protected in some states.
13. Despite their small size, bobcats are powerful predators.
14. Bobcats help keep the populations of small animals in check.

Bobcats are found throughout most of North America, from southern Canada to northern Mexico. They prefer to live in dense forests, but they can also be found in other types of habitats, including deserts, swamps, and grasslands. Bobcats are solitary animals and are rarely seen in groups.

They are great climbers and can easily climb trees to escape predators or to catch their prey. Bobcats are nocturnal animals, which means they are most active at night. They spend their days resting in dens or shelters that they have built for themselves.

This name refers to the bobcat’s reddish-brown coat, which is typically covered in distinctive black spots. Bobcats are members of the family Felidae, which includes all species of wild cats. They are closely related to other lynx species, such as the Canadian lynx and the Eurasian lynx. 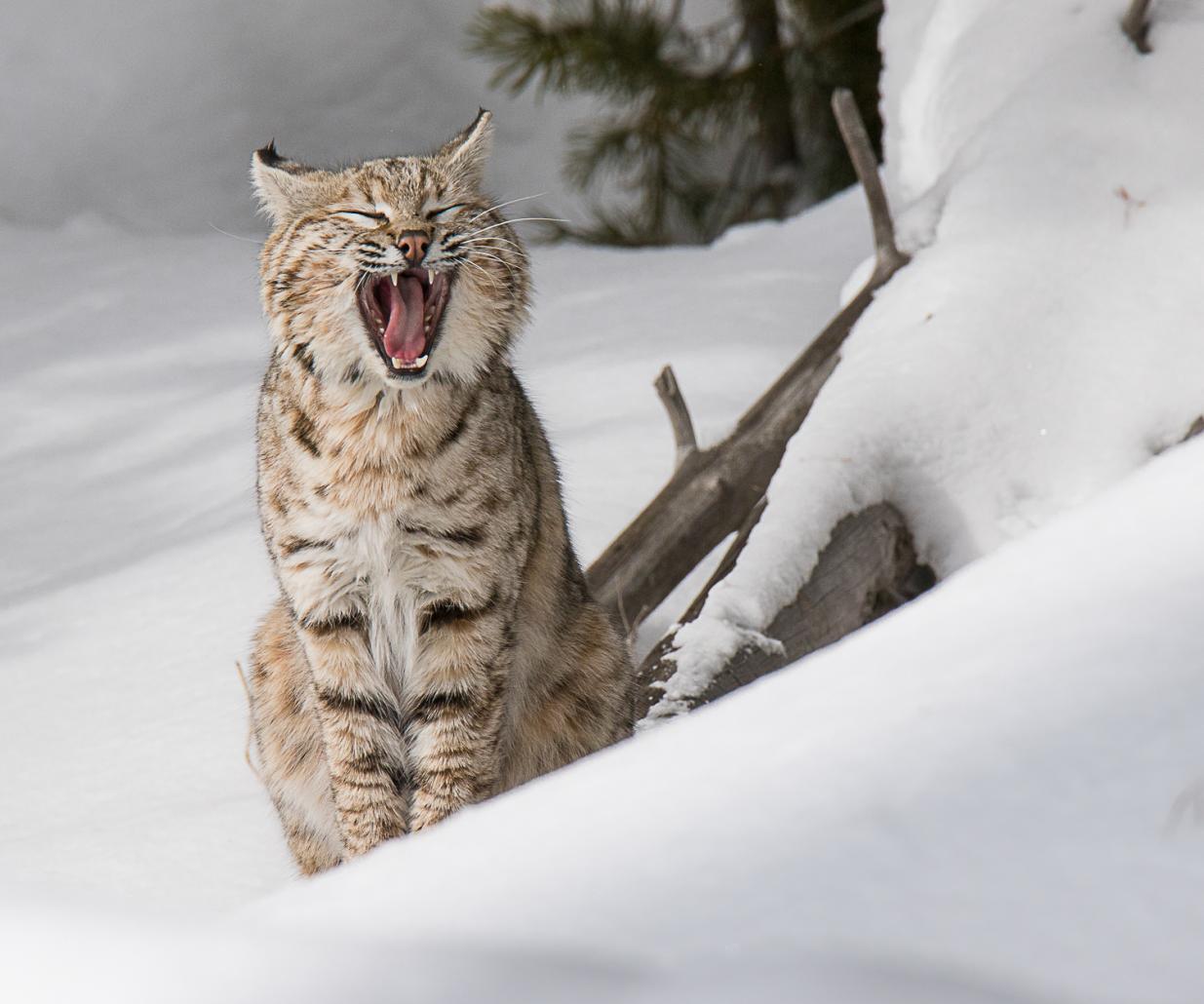 These adaptations enable them to hunt efficiently. Their sharp claws and powerful jaws also help them to hold onto their prey once they have caught it. Bobcats typically hunt small animals, such as rabbits, squirrels, and birds, but they are also known to eat larger prey, such as deer or even livestock.

4. Bobcats are solitary animals and are rarely seen in groups.

Bobcats are solitary animals and are rarely seen in groups. Unlike lions, bobcats do not live in social groups or prides. Instead, they prefer to live alone and only come together to mate. Male and female bobcats have separate territories, and they will defend their territory from other bobcats or animals that try to invade their space.

Male bobcats have larger territories than females, and their territories may overlap with several female territories. This allows them to have access to multiple females for mating.

5. Bobcats are great climbers and can easily climb trees. 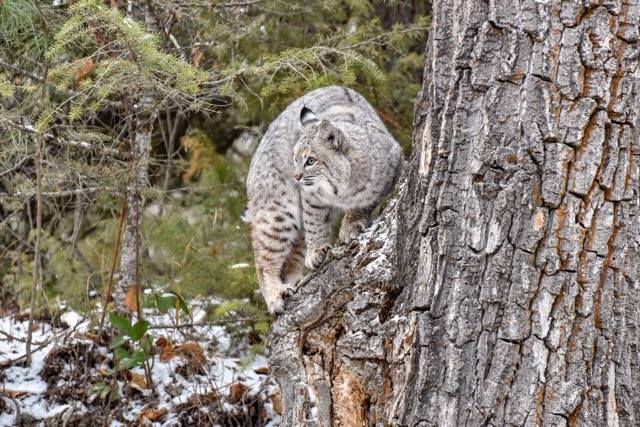 Bobcats are great climbers and can easily climb trees. They have sharp claws and powerful hind legs, which enable them to climb trees with ease.

6. Bobcats are skilled hunters, and they hunt during dawn and dusk.

Bobcats are nocturnal animals, which means they are most active at night. They typically hunt during dawn and dusk, when their prey is most active and less likely to see them coming. In the wintertime, when food is scarcer, some bobcats may adjust their sleep schedule and hunt during the day more often in order to increase their chances of catching prey.

Their excellent hearing, vision, and sense of smell help them to locate their prey. Bobcats are skilled hunters and are able to sneak up on their prey quietly. They are also very agile and can jump long distances to catch their food. They typically hunt small animals, such as rabbits, squirrels, and birds, but they are also known to eat larger prey, such as deer or even livestock.

7. The bobcat’s coat is reddish-brown with black spots. 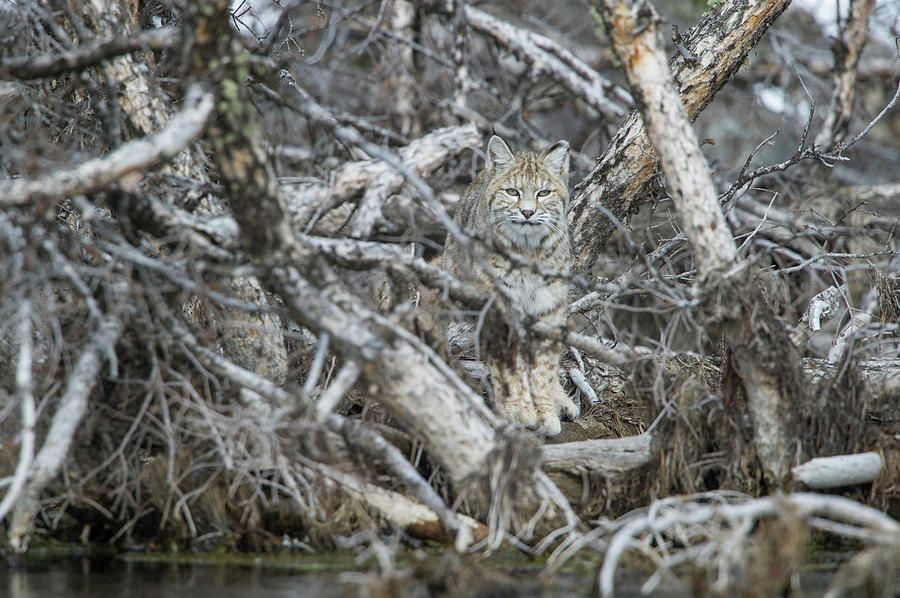 The bobcat’s coat is typically a reddish-brown color, but it can vary from light grey to dark brown depending on the region they live in. They also have distinctive black spots on their fur, which helps to break up their outline and makes them more difficult for predators to spot.

8. Bobcats have excellent hearing, vision, and sense of smell.

Their keen senses also help them to avoid predators and to navigate their environment. Bobcats have large ears that are sensitive to even the slightest sounds, which enables them to hear their prey from a long distance away.

They also have sharp eyesight, which allows them to see their prey clearly, even in low-light conditions. Bobcats have eyes that contain a tissue called the tapetum lucidum, which is commonly found in nocturnal animals. The tapetum lucidum is a reflective layer of cells that is located behind the retina and helps to increase the amount of light that reaches the retina.

This allows bobcats to see in low light conditions and to adapt quickly to changes in light levels. The tapetum lucidum is also responsible for the characteristic glow or shine that is sometimes seen in the eyes of nocturnal animals when they are exposed to light.

In addition, bobcats have a strong sense of smell, which helps them to track their prey and to detect other animals in their territory. Their excellent senses make bobcats highly effective hunters and predators.

9. Bobcats are territorial animals and will defend their territory.

Bobcats are territorial animals and will defend their territory from other bobcats or animals that try to invade their space. Each bobcat has its own territory, which it will mark with urine and feces to let other animals know that the area is occupied.

Bobcats are solitary animals and do not live in social groups or pride like some other species of wild cats. However, male and female bobcats may share overlapping territories, which allows them to mate and raise their young.

Bobcats are known to be territorial animals, but they are not necessarily aggressive animals. They will only become aggressive if another animal enters their territory and threatens their safety or the safety of their young.

These names are not used officially or scientifically, but they are commonly used by people who are familiar with bobcats.

Bobcats mate in the late winter, typically between February to late March, and have a gestation period of about 60 to 65 days. Female bobcats give birth to a litter of 1-6 cubs, which are born blind and helpless.

Bobcat cubs are typically weaned at around three months of age. At this point, they are old enough to start eating solid food and will begin to eat the meat that their mother brings back for them.

The mother will continue to bring food for her cubs and will teach them how to hunt for themselves. The female will stay with her cubs for almost a year, protecting them and teaching them the skills they need to survive on their own.

Male bobcats do not provide any parental care and do not help to raise their offspring. Once the cubs are old enough to hunt and fend for themselves, they will leave their mother’s territory and establish their own territory.

12. Bobcats are not endangered but are protected in some states.

Bobcats are not considered to be endangered, but they are protected in some states. Bobcats are common throughout North America and have a wide range, but their populations have declined in some areas due to habitat loss and other human-related factors.

In order to protect bobcats and ensure their continued survival, some states have enacted laws that prohibit hunting or trapping without a license.

These laws also establish limits on the number of bobcats that can be taken each year and specify the methods that can be used to hunt or trap bobcats. By protecting bobcats and their habitat, we can help to ensure their continued survival in the wild.

13. Despite their small size, bobcats are powerful predators.

Bobcats are skilled at stalking and ambushing their prey, and their powerful jaws and sharp claws enable them to catch and kill their prey efficiently. Their keen senses of hearing, vision, and smell help them to locate and catch their prey, even in low-light conditions.

Despite their small size, Bobcats’ jaws are powerful enough to deliver a bite that is stronger than some large predators on earth that of a fox, cheetah, or snow leopard. This powerful bite allows bobcats to catch and kill their prey efficiently, even when they are hunting larger animals.

14. Bobcats help keep the populations of small animals in check.

Bobcats are important predators in the ecosystem, and they help to keep the populations of small animals in check. By preying on animals such as rabbits, squirrels, and birds, bobcats help to prevent these species from overpopulating and damaging their habitats.

This is important for maintaining a healthy and balanced ecosystem. In addition, bobcats also help to control the populations of other animals, such as rodents, which can be destructive to crops and property. By keeping these populations in check, bobcats play a valuable role in the ecosystem and in human agriculture.

15 Moose Facts for Kids to Amaze Your Friends

17 Dragonfly Facts for Kids to Impress Your Teachers

12 Arctic Wolf Facts For Kids To Boggle Your Mind