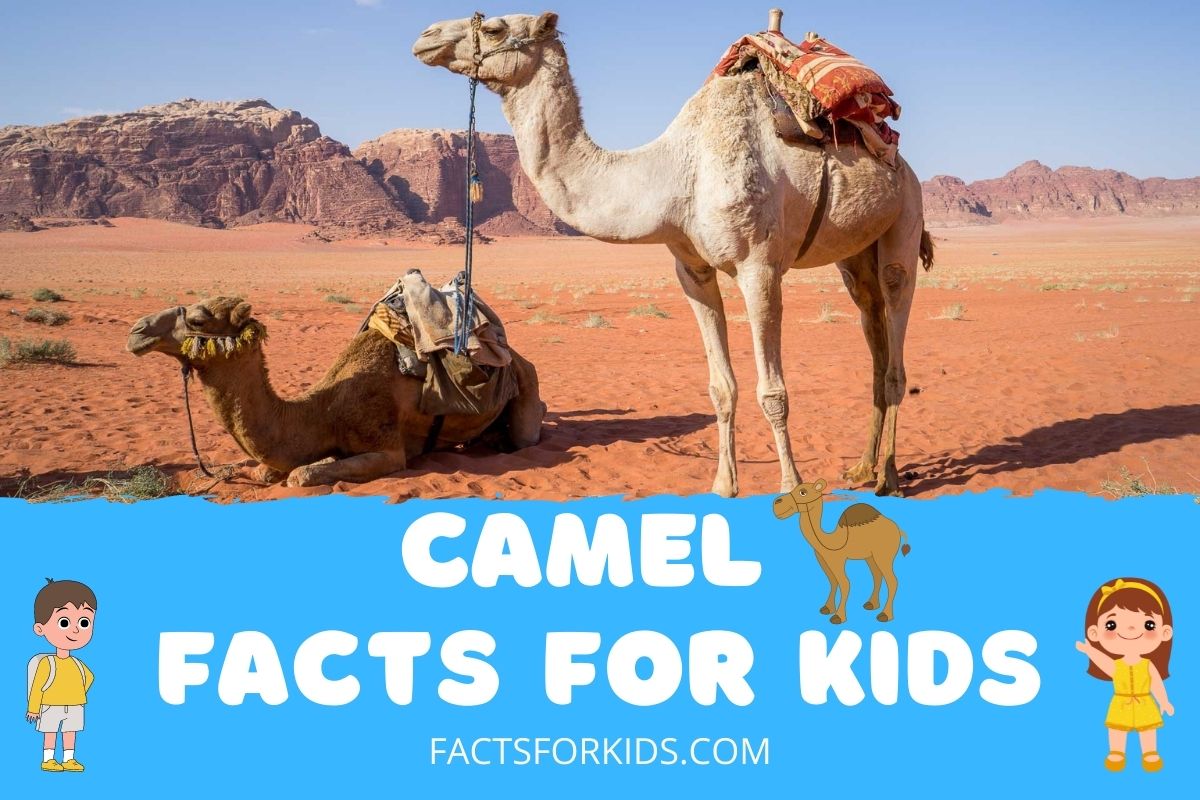 We can’t possibly imagine a desert without immediately thinking of a camel. A camel and a desert always go hand in hand. And that is probably one of the many reasons why camels are famously known as the “ship of the desert.”

Riding a camel could easily slide into many people’s bucket lists. Some tourists even visit the desert only to spot these large, long-legged animals.

Camels have humps, they live in a desert, and they can magically survive the desert heat. Most of us know these basic facts. But only a few know that their bodies are specially adapted to survive the heat. They have all sorts of amazingly cool ways to beat the heat.

There are lots of other fun things to learn about camels. Let us all get started with these incredible facts about camels.

Contents show
1. Camel spit when they feel threatened
2. Camel humps do not store water
3. There are over 160 words for camel in Arabic alone
4. Camels can survive without drinking water for over 15 days
5. Camels can drink as much as 40 gallons of water at a time
6. Camels can survive both extreme heat and cold
7. Camels have three eyelids
8. Camels are very social
9. Camel’s nose can retain water vapors
10. A camel milkshake is made of camel’s milk
11. A camel can nurse its calf for up to 18 months
12. Female camels stay pregnant for about 13 to 14 months
13. A camel can run up to 40 miles per hour
14. Newly born baby camels do not have humps
15. Camels have very thick lips
16. Camels pee on their back legs

1. Camel spit when they feel threatened

Not exactly a spit, though. It is more like camels throwing up a foul-smelling mixture of vomit and saliva. Although an agitated camel usually leaves a nasty bite to display their temper. There are quite exceptions to it. Some choose to spit and not bite. Camels will directly project their foul spit when they feel threatened or annoyed.

Some researchers also believe that camels may also spit to express their excitement. But the unpleasant nature of their spit does make us question these claims.

2. Camel humps do not store water 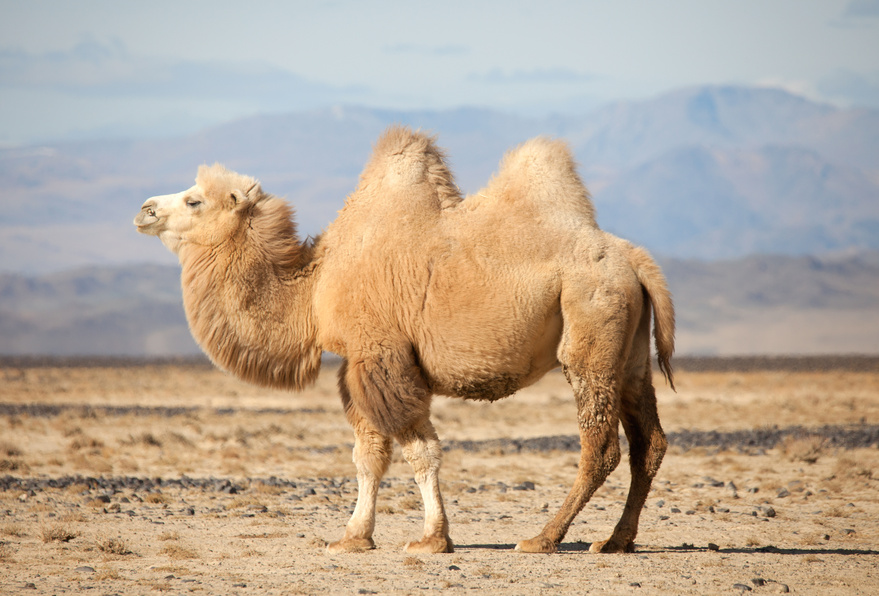 But this is definitely not because the hump stores water for the camel. Rather, these humps store fats that come in handy when the camel requires nutrition. A camel can easily convert the fat stored in the hump into food or water.

Humps also help camels keep their cool in the desert heat. So much to ask for from one huge bump on the back!

3. There are over 160 words for camel in Arabic alone

Yes. This is absolutely a very true fact! The Arabic language has a plethora of different words to describe a camel. These various terms are different based on different criteria.

For example, they have different words for different camel types based on drinking behavior. Another few are based on physical characteristics, color, and the list adds up more.

One of the many meanings of the word “camel” is beauty. So don’t ever try calling them ugly!

4. Camels can survive without drinking water for over 15 days

Imagine yourself going thirsty for 15 days, unimaginable. Right? But a camel can easily pull off such a difficult survival task. One of the prime reasons why they can easily go on days without water is, of course, because of humps.

But other than that, their bodies are specially adapted to ensure minimal water loss. They have thick syrupy urine with less water and dry feces that are so dry that they can easily catch fire. And they rarely sweat.

A camel has so many things to consider to survive the harsh deserts. But surviving is made easier for them, all thanks to their physical adaptations.

5. Camels can drink as much as 40 gallons of water at a time As already stated in the previous fact, camels easily go about 15 days without water. Ever wondered how they do that? Yes. There is the most-powerful camel hump that makes the survival task easier for a camel. But do you know that camels also store water in their blood cells?

Camels have extremely elastic blood cells that can change their shapes easily. So that when a camel encounters an oasis after staying thirsty for weeks, they can easily consume about 30 gallons of water in one go. This excess water is then stored in their blood cells, which camels gradually use during their difficult dry days without water.

6. Camels can survive both extreme heat and cold

Deserts aren’t the best place to live comfortably. Some deserts can be extremely hot, whereas some deserts are freezingly cold. But camels have different inbuilt potentials to survive these extremes.

Desert sand can be burning hot. But we often find some camel effortlessly treading through the sand. How? We might ask. The answer is that their knees, feet, and elbows come with a heat-resistant pad that helps them sit and move comfortably.

Some camels even have furs, a very unlikely physical characteristic for a desert animal. Deserts are already so hot; why would they even need furs for? Again, the answer is that it helps them insulate themselves from the harsh winter cold. So, you see, camels have different survival kits for different situations.

Yes. Camels have three eyelids! Well, it’s not very unusual for an animal to have three eyelids since other animals like lizards, snakes, and frogs also have a third lid for their eyes. But what makes a camel’s eyelid special?

Slightly lesser than an entire eyelid, this third eyelid is more like a protective membrane protecting its eyes from sand and dirt. This almost-transparent membrane situates itself at the very corner of a camel’s eye. And makes its appearance only when it is necessary. That is, only when it needs to shield the eyes from possible harm.
Fun fact. A camel can see even when this third eyelid is closed because this third lid is thin and transparent enough that it doesn’t interfere with a camel’s field of vision. 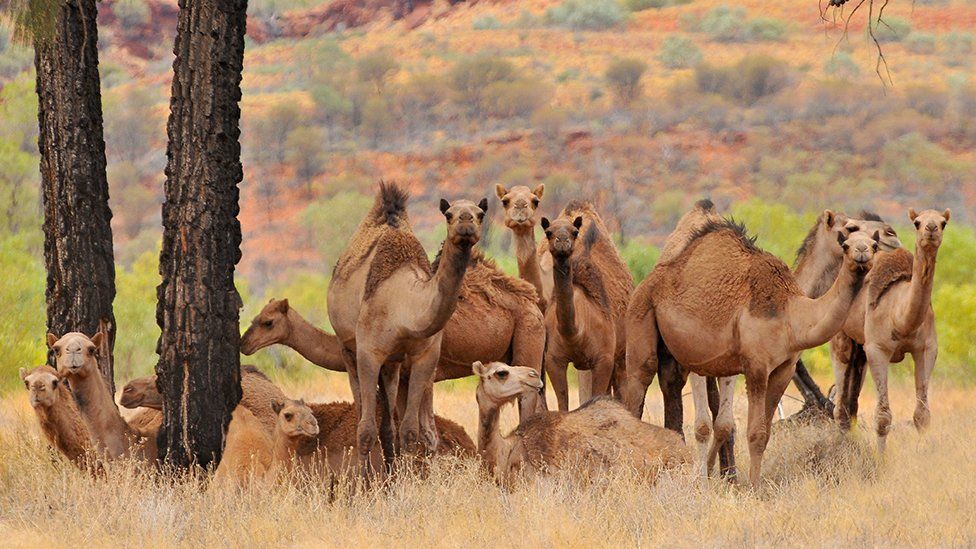 Visit a desert and observe the camels in their wild habitat. You will mostly find them moving and living in groups of 20 or 30. Camels are very social. They like living in groups, and their group is called a herd. It usually consists of one dominant male, a few females, and their young ones. They live together, eat together, communicate with each other, and survive the desert together.

The Dromedary Camels are known for their unique ability to extract water from their exhaled air. We release a good amount of water vapor when we exhale. A fact that could be proved by exhaling on a cold glass surface. But for a camel, every little amount of water conserved is paramount to keep their bodies going.

A camel has a very dry nasal passage. It helps them recondense the water vapor from each breath. Therefore, even the breath that they release is extremely dry to ensure minimum water loss. Camel can also completely shut down their nostrils during sandstorms. Another unique means to keep their lives afloat!

10. A camel milkshake is made of camel’s milk 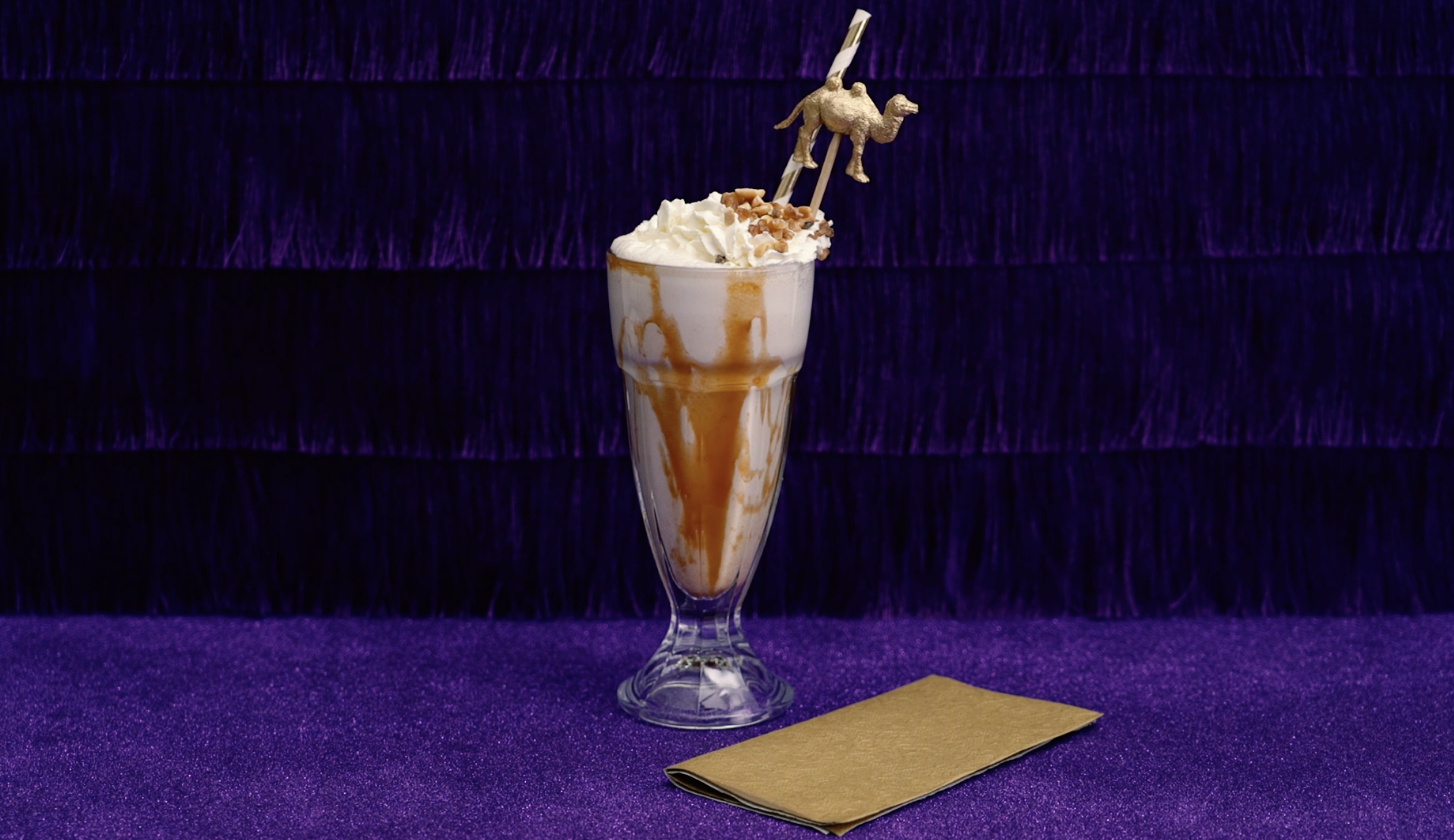 A female camel’s milk is the white gold of the deserts. It is simply overflowing with rich nutrients. It has a high concentration of protein and fats compared to cow’s milk. Extremely useful for infants’ growth. Minerals, vitamins, irons, you name it, the camel milk has it!

Camel milk is even used to treat illnesses like tuberculosis. It is also known to improve immunity, heart problems, and blood circulation. What’s more, a camel milkshake, even the name itself, sounds delicious! Do taste your fill of camel milkshake if you ever visit Abu Dhabi.

After learning all the good benefits of a camel’s milk, it’s predictable why a camel’s calf would love to lactate on its mother’s milk for such a long period. Isn’t it?

To submit to the insatiable demands of her suckling baby, the mother camel can continue to lactate for as long as 18 months.

12. Female camels stay pregnant for about 13 to 14 months

Long pregnancies in animals are not unheard of. Rhinos and elephants are known to carry their babies for more than 14 months. Similarly, an expecting camel mother also carries her baby for 13 to 14 months.

Some mothers are even known to pause mid-labor if they feel like this isn’t the right time to deliver the baby. These mothers then keep their babies in their bellies until they resolve their minds on the right time.

Okay. Let’s talk about speed. Camels obviously do not lag behind when it comes to the question of speed. A camel can begin the race with an amazing speed of 40 miles per hour in a racing field, but it surely undergoes a slight dip as the race progresses forward.

However, a camel can still maintain an average 25 miles per hour speed. Only a 20% difference when you compare it with the average running speed of a horse at 32 miles per hour.

Both horses and camels have made it to the list of the top 10 fastest animals. However, a camel’s speed is affected by its body structure and the big fat-storage bag it carries around on its back. But still, a camel can be exclusively trained to be a racer. We wonder if a camel race does exist. Do find it out for your curious mind!

14. Newly born baby camels do not have humps 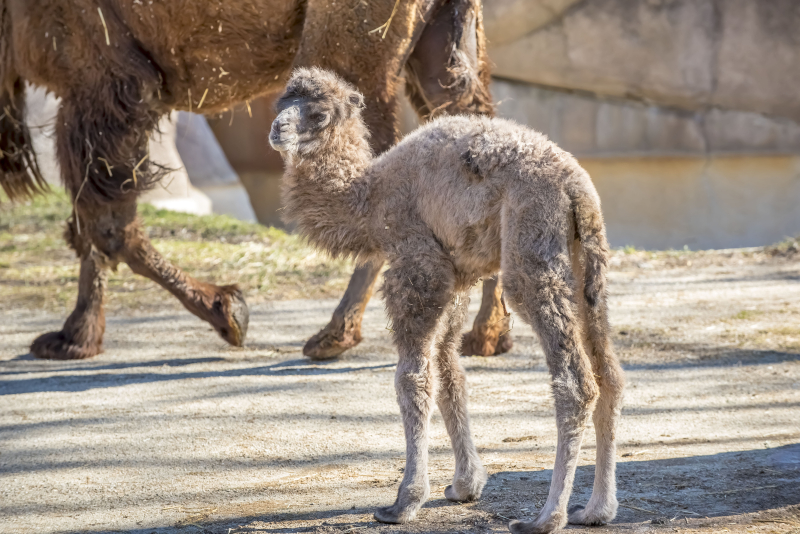 After carrying their babies to full term, a camel mother usually finds herself a private spot to deliver her baby. A newly born camel baby does not come with a hump. It is called a calf, and it starts walking right within 30 minutes of its birth. Female camel usually gives birth to only one calf at a time, but they can even birth twins if they get lucky. But that’s a very rare case.

This baby camel will be a full-grown adult camel in 7 years. Then it spends the remaining of its total lifespan of an average of 17 to 20 years as an adult camel.

The desert is filled with wild and thorny shrubs. But a camel being a herbivore, has to live its life on these salty and thorny plants. Ever wondered how camel manages to forage on such difficult food? Well, it is all thanks to their lips.

Camels have real thick lips. Their upper lip is split into two so that they can eat and graze on the roughest food without harming themselves. Each body organ of a camel screams its perks. And we totally get it!

16. Camels pee on their back legs

The last but the weirdest fact! Peeing on their own body, who does that? But camels, of course. But nothing about camels is what meets the eye. Everything has a reason. Camel pee on their legs to cool themselves down and also as a mating ritual. This is definitely one of its own kinds of mating rituals we are learning about!

Living a life as a camel must have been extremely difficult if not for these special adaptations. Every organ and behavior of a camel is guided by its survival instinct to reduce its heat loss to increase its survival potential.

But every little detail of a camel’s adaptation teaches us the value of water for our survival and other animals. We have much to learn from camels to save water and reduce the wasting water.

You can prepare your personal list of positive actions to save water and the earth.