Are you a guinea pig enthusiast, or are you thinking of adopting a guinea pig as a pet? If so, you’re in for a treat! Guinea pigs are charming, curious, and full of personality. In this blog post, we will share lots of surprising and interesting facts about guinea pigs that will help you learn more about these adorable little creatures.

From their unique digestive system to their social behavior, there’s a lot to discover about guinea pigs. Keep reading to learn more and get to know these fascinating animals even better.

1. Guinea pigs are not pigs, and they are not from Guinea. 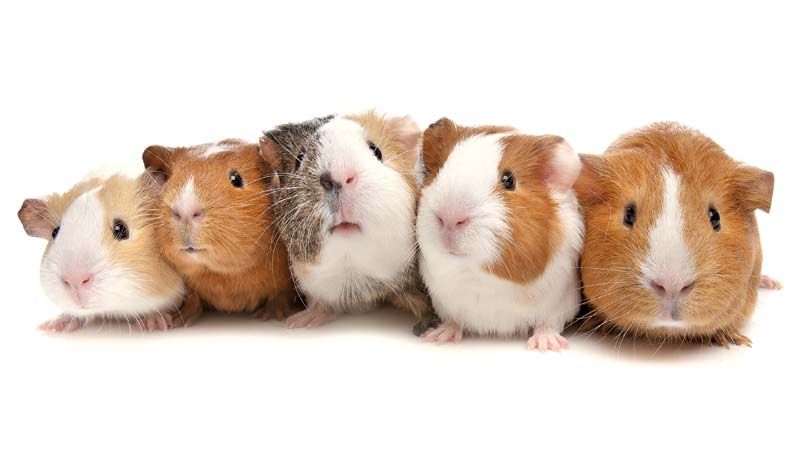 Despite their name, guinea pigs are not pigs, and they are not from Guinea. Guinea pigs are a type of small rodent that is native to South America. They have short, stocky bodies and long, fluffy fur that can be a variety of colors and patterns.

They were first brought to Europe by traders. Because their squeals sounded similar to those of pigs, they were called pigs. However, their scientific name is “Cavia porcellus,” which means “little pig” in Latin. So, even though they are not actually pigs, their name does reflect their physical appearance and behavior.

2. Guinea pigs are popular pets and are often chosen for their gentle and friendly personalities.

Guinea pigs are popular pets, especially for families with children. They are known for their gentle and friendly personalities and are often chosen for their calm and affectionate nature.

Unlike some other small animals, such as hamsters or gerbils, guinea pigs are not known for being skittish or nervous. Instead, they are typically easy-going and enjoy spending time with their owners. They also have a lot of energy and love to play and explore, which makes them fun and engaging pets for kids and adults alike.

3. Guinea pigs are social animals and are typically kept in pairs or small groups. 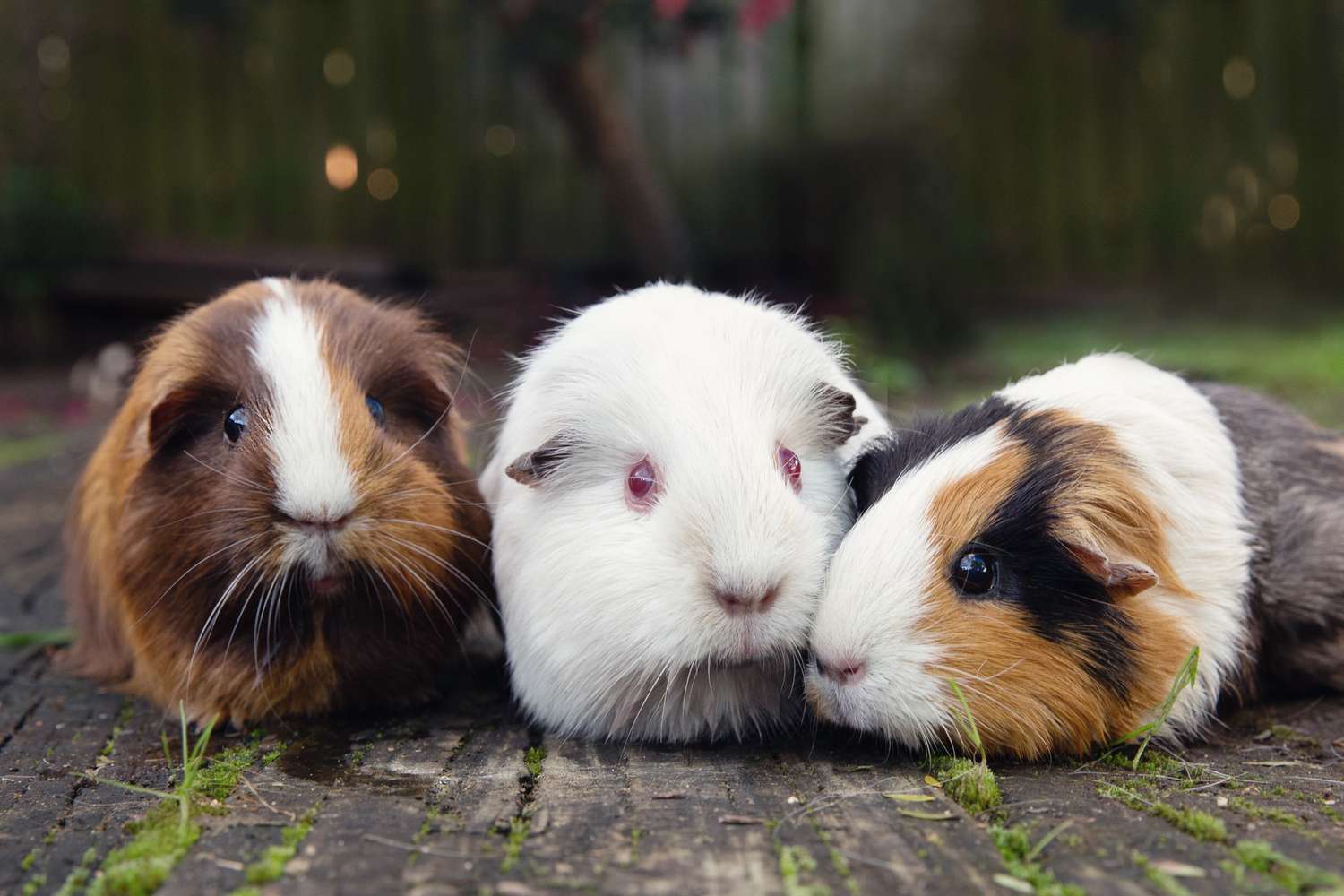 Guinea pigs are social animals and do best when they are kept in pairs or small groups. They are not solitary creatures like some other small animals, such as mice or rats, and need the company of other guinea pigs to be happy and healthy. In the wild, guinea pigs live in large groups called “herds”, and they have a complex social structure and hierarchy within the herd.

When kept as pets, guinea pigs will typically bond with each other and form close relationships. They will groom each other, play together, and even sleep together. It is important to provide them with enough space and companionship to allow them to express their natural social behaviors.

Yes, that is correct. Guinea pigs do not have sweat glands like humans do, so they are unable to sweat. Instead, they regulate their body temperature through other means, such as panting and seeking out cool areas.

Yes, it’s true that an adult Guinea pigs can stay awake for around 20 hours a day. They take shorter naps throughout the day and night. This is because guinea pigs are prey animals and they need to be on the alert in case a predator is nearby.

They also sleep less because they are social animals and they enjoy being active and interacting with their human caregivers and other guinea pigs. It is important to provide your guinea pig with plenty of toys, activities, and opportunities for social interaction to keep them happy and healthy.

6. Guinea pigs have continually growing teeth, which must be maintained through chewing and gnawing to avoid overgrowth. 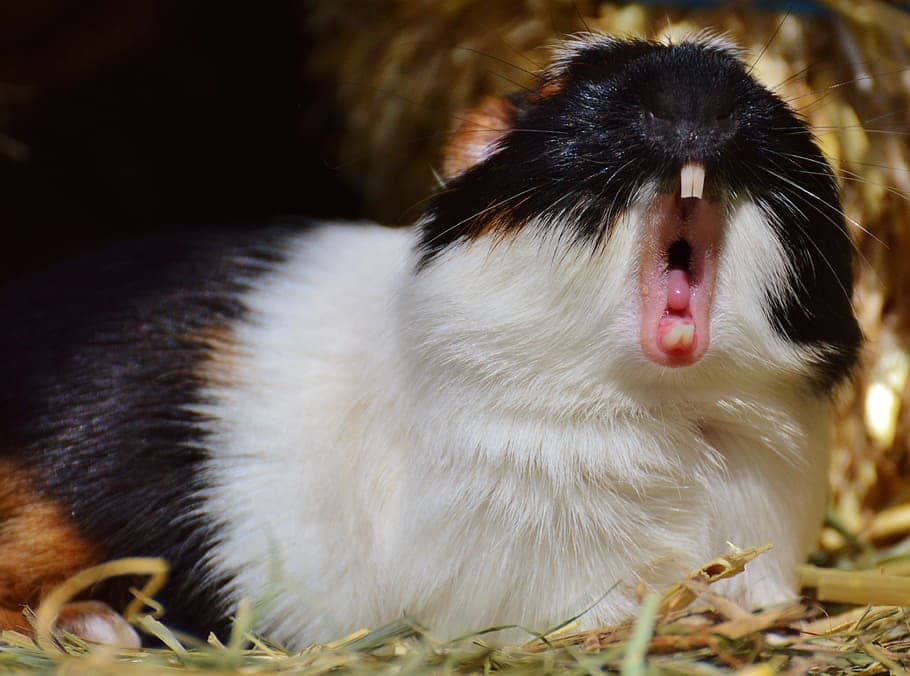 Like all rodents, guinea pigs have continually growing teeth. In order to keep their teeth at a healthy length, they must chew and gnaw on a regular basis. This is why it is important to provide your guinea pig with plenty of chew toys and other items to gnaw on, such as hay, branches, and chew sticks.

If a guinea pig’s teeth are not kept properly trimmed, they can overgrow and cause health problems, such as difficulty in eating and mouth pain.

Overgrown teeth can also affect a guinea pig’s ability to groom themselves properly, which can lead to other health issues. It is important to monitor your guinea pig’s teeth and provide them with appropriate chew toys to help maintain their dental health.

7. Guinea pigs are herbivores, which means they only eat plants. 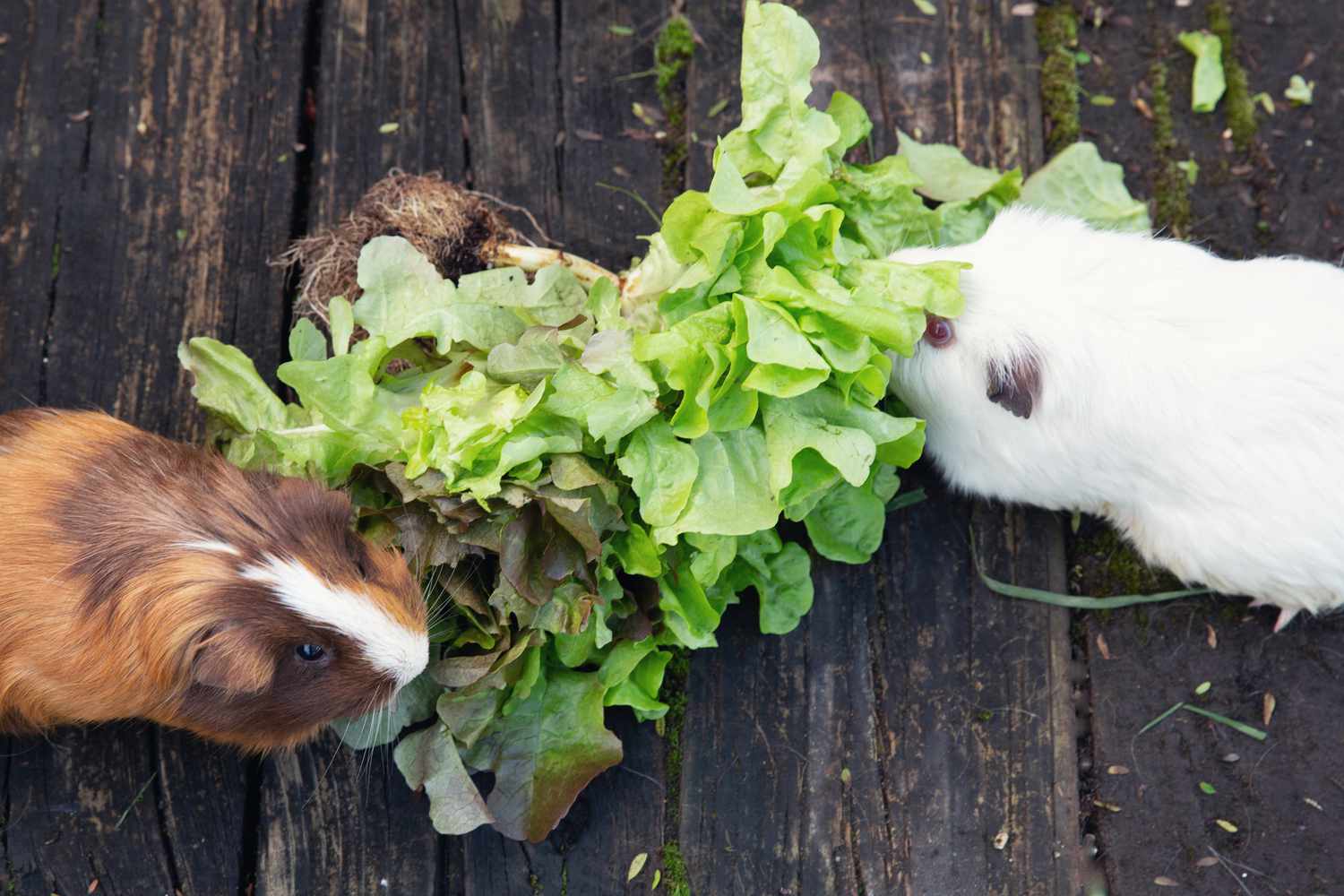 Guinea pigs have a special digestive system that allows them to break down and extract nutrients from tough plant material, such as hay. In fact, hay should make up the majority of a guinea pig’s diet and should be offered to them daily to keep their digestive system healthy and prevent overgrown teeth.

It is important to avoid giving your guinea pig high-fat or high-sugar foods, as well as foods that are toxic to guinea pigs, such as onions, chocolate, and avocado. By providing your guinea pig with a healthy and varied diet, you can help ensure their overall well-being and longevity.

Guinea pigs are naturally active and curious animals, and they enjoy running, playing, and exploring their surroundings. As rodents, guinea pigs have a strong instinct to move and explore, and they can be very energetic and playful.

In order to provide your guinea pig with the mental and physical stimulation they need, it is important to give them plenty of space to run and play, as well as plenty of toys and other items to interact with.

This can help prevent boredom and ensure that your guinea pig stays happy and healthy. Some common toys and activities for guinea pigs include tunnels, balls, and cardboard boxes to play in and chew on.

9. Guinea pigs have a keen sense of smell and use this to find food and avoid predators.

Like other rodents, guinea pigs have a highly developed sense of smell , which is far more sensitive than that of humans. They use their sense of smell to locate food sources, such as grasses and other vegetation, as well as to avoid potential threats, such as predators.

Guinea pigs have a lifespan of around 5-7 years on average. However, some guinea pigs may live longer or shorter lives depending on a variety of factors such as their health, diet, and living conditions.

In general, guinea pigs are relatively long-lived for their size and they can make great companions for many years with proper care and attention. It is important to provide your guinea pig with a healthy diet, plenty of fresh water, a clean and safe living environment, regular vet checkups, and lots of love and attention to help them live a happy and healthy life.

11. Guinea pigs require regular exercise and should have plenty of space to move around and play.

Guinea pigs are active animals and require regular exercise in order to maintain their health and well-being. In the wild, guinea pigs are known to move around and explore their surroundings, and they can be quite energetic and playful.

When kept as pets, it is important to provide your guinea pig with plenty of space to move around and play, as well as plenty of toys and other items to interact with. This can help prevent boredom and ensure that your guinea pig stays happy and healthy.

Some common toys and activities for guinea pigs include tunnels, balls, and cardboard boxes to play in and chew on. It is also important to provide your guinea pig with a safe and secure enclosure in which they can move around and exercise, as well as a healthy and varied diet to support their overall health and well-being.

12. Guinea pigs are intelligent animals and can be trained to do tricks and respond to commands.

Guinea pigs are intelligent animals and can be trained to do tricks and respond to commands, just like dogs or cats. They are social animals and thrive on attention and interaction with their human caregivers.

With patience and consistency, you can teach your guinea pig to do a variety of tricks, such as coming when called, sitting on command, or even playing games like fetch. Training your guinea pig can be a fun and rewarding experience for both you and your pet.

14. Guinea pigs have a unique way of showing affection: they will often “popcorn” by jumping up and down and running around excitedly when they are happy.

Guinea pigs have a behavior known as “popcorning” where they jump up and down in excitement. This behavior is often seen when guinea pigs are feeling playful and happy, and it is often accompanied by a series of rapid, high-pitched vocalizations known as “wheeking.”

Popcorning can be a joy to watch, and it is a good sign that your guinea pig is happy and healthy. Some people even train their guinea pigs to popcorning on command as a fun trick. 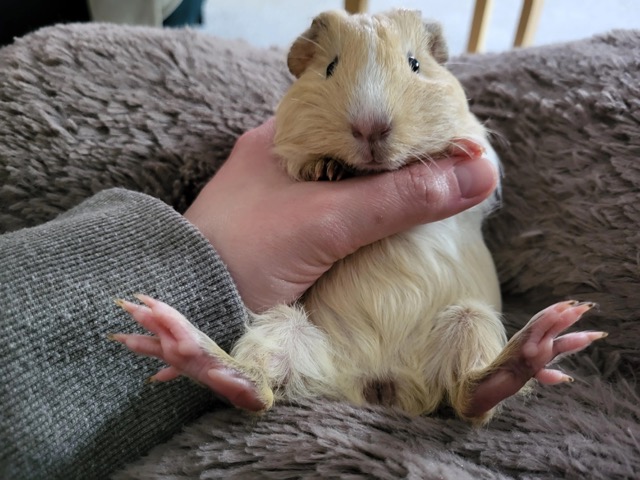 Yes, Guinea pigs have four toes on their front feet and three toes on their back feet. This arrangement is known as a syndactyl foot, and it helps guinea pigs grip the ground better when running and climbing.

Guinea pigs are agile animals and can move quickly when they need to, and their syndactyl feet are an important adaptation for their active lifestyle.

Some guinea pigs may also have an extra toe on one or more of their feet, a condition known as polydactyly. This is a relatively common genetic condition in guinea pigs and is not generally considered to be harmful to the animal.

16. Guinea pigs have very strong hind legs that they use for jumping and running.

Guinea pigs have strong hind legs that they use for jumping and running. They are also very agile and can make sharp turns when they are running or moving around. This helps them to avoid predators in the wild and to navigate their environment. Because of their strong hind legs and agility, guinea pigs can be great at climbing and jumping over obstacles.

17. The oldest recorded guinea pig lived for 14 years and 10 months.

The oldest recorded guinea pig lived for 14 years and 10 months. This is quite long for a guinea pig, as the average lifespan of a guinea pig is about 5 to 7 years. The longest-lived guinea pig on record was named Snowball, and she was owned by a family in the United Kingdom.

She she passed away at the ripe old age of 14 years and 10.5 months on 14 February 1979. Snowball was a beloved pet and was well known in the guinea pig community for her impressive longevity.

17 Coyote Facts for Kids to Learn and Howl About!

12 Hammerhead Shark Facts for Kids to Swim Through