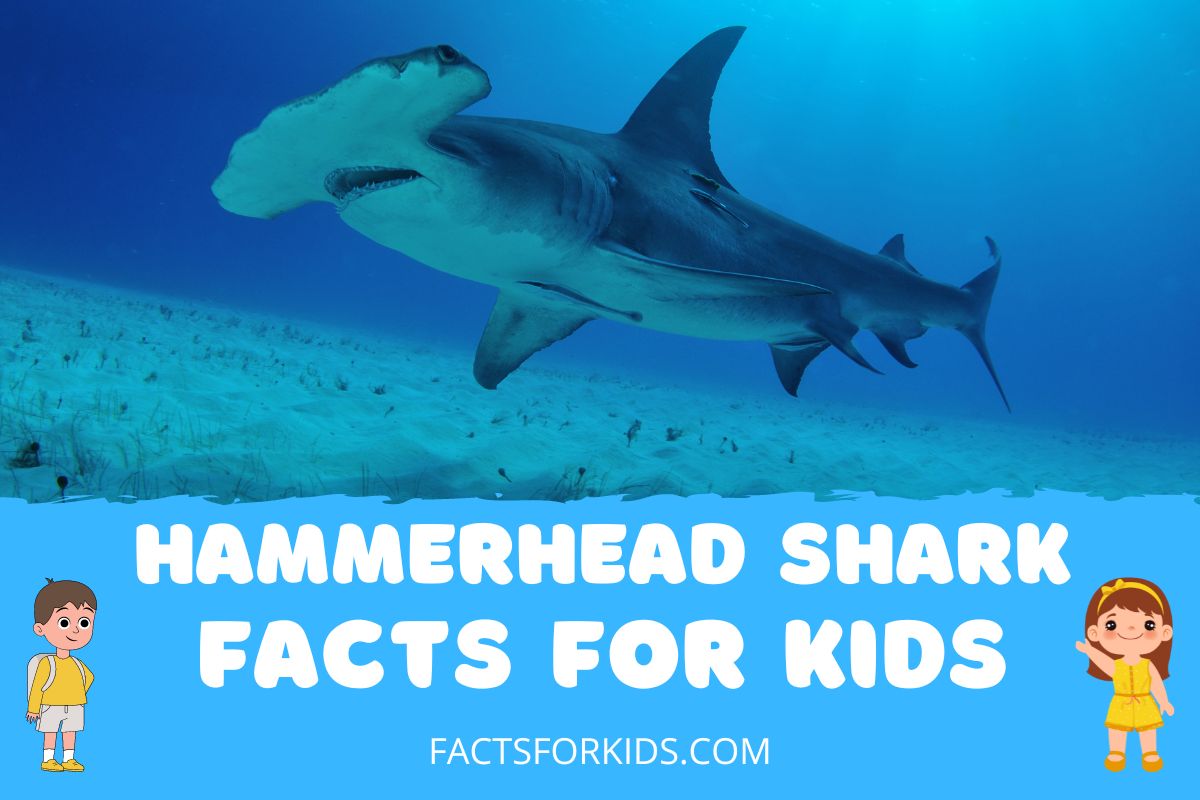 Hammerhead sharks are some of the most fascinating and unique creatures in the ocean. With their distinctive hammer-shaped heads and powerful, muscular bodies, these sharks are a sight to behold. In this blog post, we’ll be sharing a bunch of interesting facts about hammerhead sharks that kids will love. From their hunting and feeding habits to the incredible adaptations that help them survive in the ocean, there’s a lot to learn about these amazing animals.

So let’s dive in and take a closer look at the world of hammerhead sharks!

1. Hammerhead sharks are named for their hammer-shaped heads. 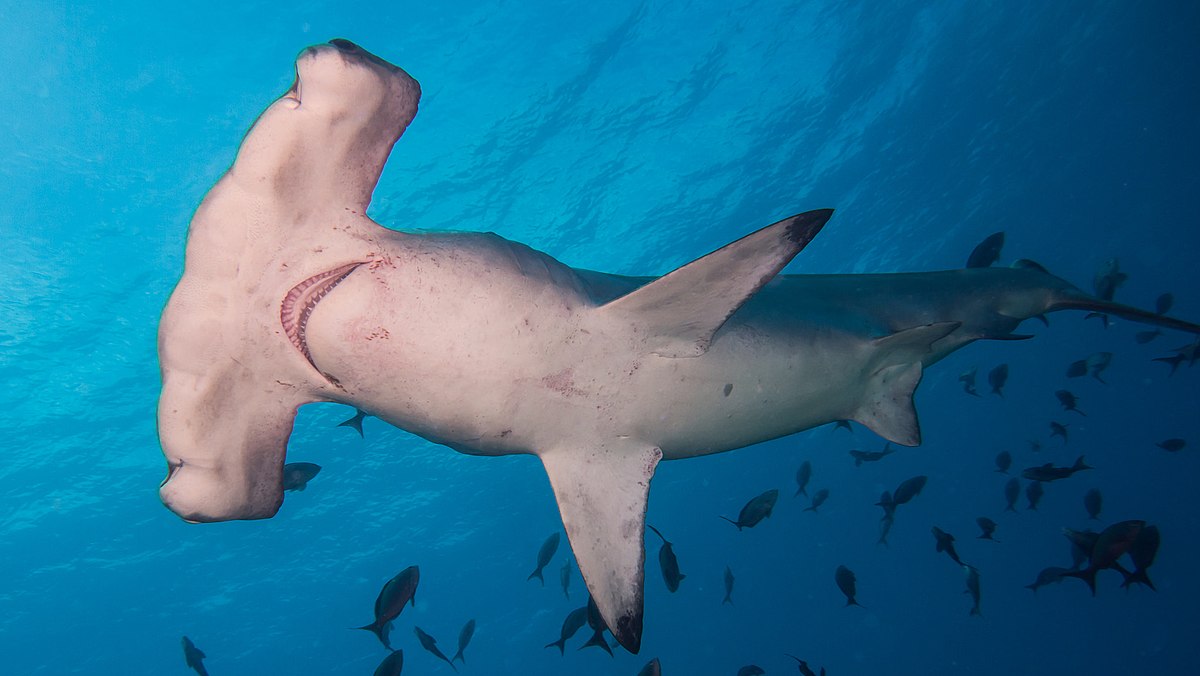 Hammerhead sharks are named for their unique hammer-shaped heads, which are flattened and wide. The scientific name for hammerhead sharks is “Sphyrnidae,” which comes from the Greek word “Sphyrna” meaning “hammer.”

The hammer-shaped head of the shark helps it to swim more efficiently and to maneuver more easily in the water, and it also gives it a larger surface area for its eyes and nostrils. This helps the shark to see and smell better, which is useful for hunting and avoiding predators.

2. There are nine species of hammerhead sharks.

Each species has its own unique characteristics and behavior, but they all share the same hammer-shaped head and lateral line organs that help them to detect electric vibrations and movement in the water.

Some species, such as the great hammerhead and the scalloped hammerhead, are well-known and widely distributed, while others, such as the scoophead are rare and little-known.

The great hammerhead is the largest of all, and it can grow to be over 20 feet long and weigh over 1,000 pounds. The smooth hammerhead is the smallest and most elusive species, and it is found in shallow coastal waters and coral reefs.

3. Hammerhead sharks live in temperate and tropical waters around the world.

Hammerhead sharks are found in warm and tropical waters around the world including, the Atlantic, Pacific, and Indian Oceans. They are often associated with coral reefs, sandy bottoms, and shallow coastal areas.

They are typically found in shallow waters, but some species, such as the great hammerhead, are known to migrate long distances and to dive to depths of over 1,000 feet.

4. Hammerhead sharks can see both above and below the water at the same time. 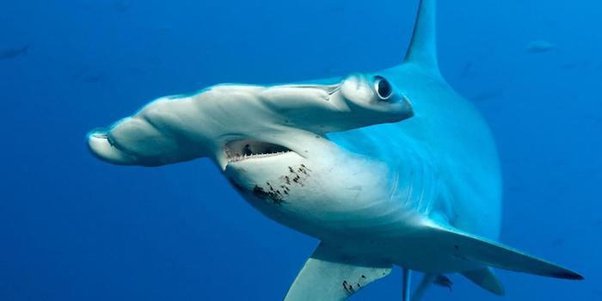 Hammerhead sharks have excellent eyesight and are able to see both above and below the water at the same time. This is because their eyes are positioned on the sides of their head, which gives them a wide field of vision.

This unique positioning of the eyes allows hammerhead sharks to see both above and below the water simultaneously, which helps them hunt for prey and avoid predators. This ability also gives hammerhead sharks a clear advantage when hunting for food, as they can see prey both in the water and on the surface.

5. Hammerhead sharks can sense the electric fields of their prey.

Hammerhead sharks have special sensors on their head called ampullae of Lorenzini, which help them detect the electric fields of their prey. These sensors are located in small pores on the shark’s head and are sensitive to small changes in electric fields.

This ability allows hammerhead sharks to locate and track their prey, even in murky or dark waters. The electric fields of prey animals can be generated by the muscle movements of the animal, and the hammerhead shark’s sensors are sensitive enough to detect these changes.

The ampullae of Lorenzini are also thought to help hammerhead sharks navigate and orient themselves in their environment, as well as detect changes in water temperature and pressure.

Overall, the ability of hammerhead sharks to sense the electric fields of their prey is an important adaptation that helps them survive and thrive in their underwater environment.

6. Hammerhead sharks use their head as a weapon while hunting!

Hammerhead sharks are known to use their unique head shape as a weapon while hunting. Their head is flattened and shaped like a hammer, which allows them to pin down their prey.

During a hunt, a hammerhead shark will swim towards its prey and then use its head to pin down the prey to the seabed. This can stun the prey, making it easier for the shark to catch and eat it.

The hammer-shaped head of the hammerhead shark is thought to have evolved as an adaptation for hunting and foraging for food. It is also thought to help the shark dig into the sand to search for buried prey, especially stingrays.

Overall, the ability of hammerhead sharks to use their head as a weapon while hunting is an important adaptation that helps them survive and thrive in their underwater environment.

7. Most hammerhead shark species are not dangerous to humans.

Most species of hammerhead sharks are generally not considered to be dangerous to humans. These sharks are typically shy and avoid contact with humans, unless they are provoked or disturbed.

However, there have been some isolated incidents in which hammerhead sharks have attacked humans. These attacks are generally the result of the shark being provoked or disturbed in some way, such as when a human swims too close to the shark or tries to touch it.

Overall, while most hammerhead shark species are not considered to be dangerous to humans, it is important to be aware of their potential to attack. It is never a good idea to approach or touch a hammerhead, and it is always best to observe them from a safe distance.

Unlike most other fish, which lay eggs, hammerhead sharks give birth to live young. This means that the babies, or pups, develop and grow inside the mother’s body until they are ready to be born.

The process of giving birth to live young is called viviparity, and it is found in some other sharks as well such as bull sharks. Viviparity offers several advantages over egg-laying, including the ability to provide the developing young with nutrients and protection inside the mother’s body.

9. Hammerhead sharks are fast swimmers and can reach speeds of up to 25 miles per hour.

Hammerhead sharks are known to be fast swimmers and can reach speeds of up to 25 miles per hour or 40 kilometers per hour. This speed allows them to quickly pursue and catch their prey and to escape from predators.

One of the reasons why hammerhead sharks are able to swim quickly is their unique body shape. Their body is slender and streamlined, which allows them to move through the water with minimal resistance. In addition, their tail is long and powerful, which provides them with the thrust they need to swim quickly.

Another reason why hammerhead sharks are fast swimmers is their ability to use their head as hydrofoil. This means that they use their head to create lift and reduce drag, which allows them to swim faster and more efficiently.

10. The average lifespan of a Hammerhead shark is around 20 to 30 years.

The average lifespan of a hammerhead shark is around 20 to 30 years. This is the typical lifespan for most species of hammerhead sharks, although some species may live longer or shorter lives.

In general, hammerhead sharks reach sexual maturity at around 8 to 12 years of age, at which point they are able to reproduce and have offspring of their own. After reaching maturity, a hammerhead shark may live for another 10 to 20 years, depending on the species and other factors.

11. Hammerhead sharks are opportunistic hunters and will eat a wide range of prey, including small fish, squid, crustaceans, octopuses, and eels.

Hammerhead sharks are considered to be opportunistic hunters, which means that they will eat whatever prey is available and easy to catch. These sharks are not picky eaters and will feed on a wide range of prey, including fish, squid, octopuses, crustaceans, and other marine animals.

The specific diet of a hammerhead shark can vary depending on the species and the location. Some species of hammerhead sharks, such as the great hammerhead, are known to feed on a variety of prey, including bony fish, rays, skates, squids, and octopuses. Other species, such as the scalloped hammerhead, may have a more specialized diet and may feed primarily on smaller prey, such as crabs and other crustaceans.

In general, hammerhead sharks are able to locate and capture their prey using a combination of their excellent eyesight and their ability to sense the electric fields of their prey. They use their hammer-shaped head to deliver powerful blows to their prey, which can stun or kill it, making it easier to catch and eat.

In 2001, a Bonnethead shark at a Nebraska zoo gave birth to a pup without a male. This phenomenon, known as parthenogenesis, is very rare in sharks.

Parthenogenesis is a form of asexual reproduction in which an egg develops and grows into an offspring without being fertilized by a sperm.

In the case of the bonnethead shark at the Nebraska zoo, the female shark had been separated from males for several years, and she somehow managed to produce a healthy pup without any genetic contribution from a male. This is a remarkable event that has attracted a lot of attention from scientists and the public.

17 Dragonfly Facts for Kids to Impress Your Teachers