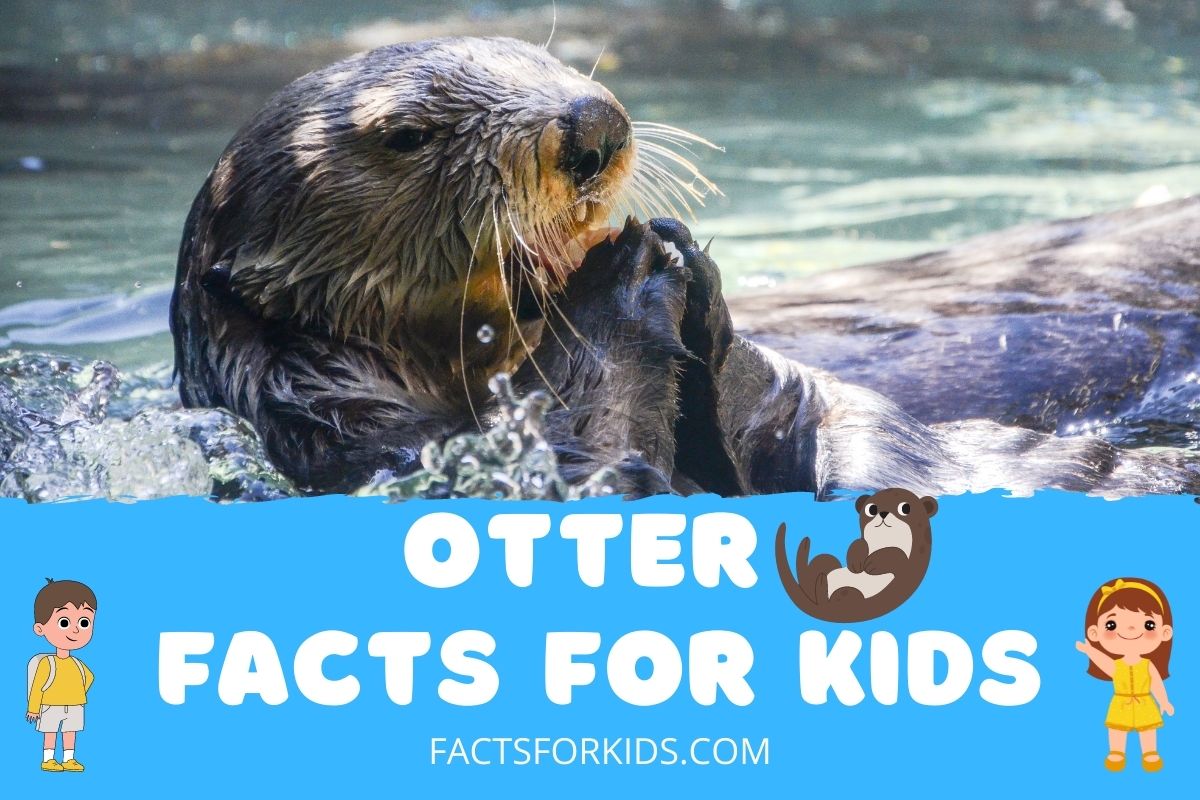 Otters are one of the most fascinating and creative animals in the world! They are furry mammals that live in both water and on land. Some live on land for long hours. And some like to float belly-side up in water all day! Unlike other mammals, like a whale or a hippopotamus, otters are smaller in size and have very thick fur. In fact, they have the thickest fur! That helps them stay warm in the water for long hours.

Want to know more? Let’s read some fun facts about otters that will help us understand them better!

Contents show
Otters are exceptional hunters and fast swimmers
Otters can hold their breath for 8 minutes
Otters use their armpit as a small carry bag
Otters are found almost everywhere except in Australia and New Zealand
Otter pups and mums have a deep and loving relationship
A group of otters floating together is called a raft
Otters aren’t all about hunting; they also love to play
Otters have extraordinary poop
Giant otters will take down an alligator to save their hunt
Otters use their adorable little paws as eye masks
Otters are very talkative mammals
Otters can help us control climate change

An otter’s predatory instincts are amazing, and they are highly intellectual and creative creatures! They are among the very few animals who use tools. Their sole goal is to have a belly full of food. This requires them to be sharp and efficient at catching tasty fish, clams, crabs, or other crustaceans.

A group of Asian clawed otters at the Washington Zoo and freshwater otters at Monterey Bay Aquarium can play the piano! Don’t believe me? Here, watch:

Otters can also learn how to use inhalers for asthma and help humans with fish hunting! Bangladesh, a country in South Asia, is known to successfully train otters to help them catch fish. This practice has been going on for generations.

They are fast swimmers. So fast, they can beat even the fastest swimmer in the world! Fish are frisky, and otters’ limbs are small. But they have long and large tails and webbed feet. This is a double advantage!

Their tail helps them direct themselves underwater, and the webbed feet give them agility. This makes them one of the best predators too! They know what they’re doing, and they know it well.

Otters can hold their breath for 8 minutes

Yes! You read that right. River otters have a large lung capacity. Their lung capacity is at least 2.5 times greater than other animals of their build. Hence, holding their breath for 8 minutes isn’t much of a task for them.

5 minutes may seem short after the river otter’s 8 minutes, but that’s how much a sea otter can hold its breath underwater. The average time you and I can hold our breath is 1 or 2 minutes max.

Otters use their armpit as a small carry bag

Because they have saggy and loose skin in their pits, it creates space for them to store things. Like rocks that help them crack clams and crustaceans and food, they wish to eat later! Otters use their big round bellies as a dining table while floating in the water. And the rocks as tools to help them eat hard-shelled snacks.

Otters are found almost everywhere except in Australia and New Zealand

America, Asia, Europe, and Africa are the continents where you can find a variety of otter species. 13 different species, to be exact! Every continent has its own variety of species, where some live in freshwaters like rivers, lakes, streams, and wetlands, and some in the sea.

There are vast differences in the behavior of each otter species. But, they all have one thing in common. They are all so cute!

Otter pups and mums have a deep and loving relationship 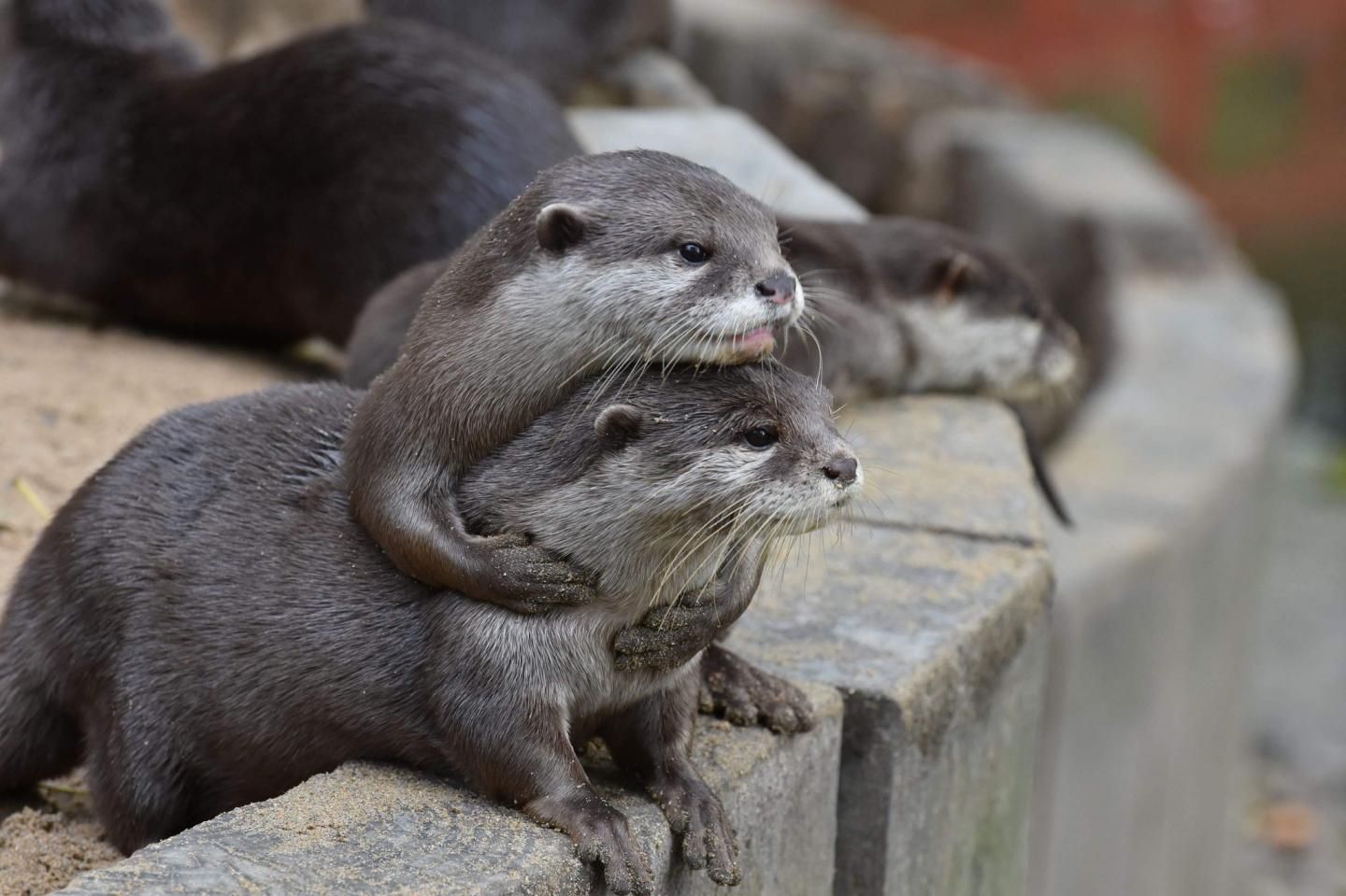 Otter mums are extra protective of their pups. You can call an otter baby a pup, cub, or kitten. These furry mommies teach their furry little pups important life skills until they turn six months old. Some mothers will adopt pups who have lost their moms or have been separated from them.

Until two months of age, the mums float with the pups on their tummies to prevent them from drowning. It is easy for a newborn pup to drown because they have dense fur. After they turn two months old, mommies will push the pups into the water and teach them how to swim underwater and float above!

The mommies will also hold their pups’ hands to sleep. This makes sure they don’t drift apart when floating in dreamland! But while they’re sleeping, they also need blankets. Kelps are seaweeds that are commonly found close to shores. Otters will use its long leaves to cocoon themselves.

A group of otters floating together is called a raft

Sea otters form a raft-like structure using seaweed as a rope to wrap around their bodies. And hence derived the name ‘raft’ to describe a large group of otters floating together. Some species have large families, and they make sure no one gets left behind. Or float away!

The largest group of otters scientists have seen floating together is 1000 otters! That’s more than 50 families of otters hanging out together.

Otters aren’t all about hunting; they also love to play

Sliding into the river, juggling rocks, and playing catch are some of the otters’ favorite games. Otters build their own mucky and muddy slides on the river bed and swoop down with a big splash! Who needs a water park when you can build your own!

They are most popularly known for their slides and how much fun they have playing on them. Have you ever played on a slide and not had fun?

Otters juggle rocks or play catch when they are utterly bored. They don’t like to sit idle in between naps and hunts. To keep themselves entertained but not lose energy, otters will juggle rocks.

Playtime can also act as a helpful hunting tool for otters. Juggling rocks may improve hand-eye coordination and, therefore, help them catch their prey better. Building slides and sliding down is a tedious task with high rewards! This helps otters build their stamina to swim for longer hours.

The quantity of food otters eat can reach up to 25% of their body weight. When an otter’s tummy is full, they are said to be more playful than when food is scarce.

A giant river otter’s family is generally very large! Anywhere between 2 to 20 members of the family can be seen playing, resting, and hunting together.

Yes, extraordinary poop! An otter’s poop can tell biologists how many kinds of fish and sea creatures live in that particular habitat. As you now know, otters eat a lot, so naturally, they poop a lot, too! This poop has its own unique name – spraint.

It is often not very stinky. But rather pungent. When one otter smells another otter’s spraint, they can promptly guess the age and sex of that otter. Whether it’s a pup, a young, or an old otter. And whether it’s male or female.

Otters in North America assign areas where they can have a “poop party”! Haha!

These areas are called latrines. Latrines are chosen places where otters come together and poop. This is where most of the socializing take place. Family, friends, and acquaintances gather and talk to each other, gossip, or just have a fun time playing with each other!

But did you know it is dangerous for an otter to come into close contact with a cat’s poop? Yes, there is a certain bacteria in cat litter that is harmful to otters. Hence, remember to never flush your cat’s litter down the pot.

Giant otters will take down an alligator to save their hunt

Oftentimes, alligators and anacondas in South America invade the otter’s territory. This could be to hunt for prey in the area or the otters themselves. A giant otter can grow to up to 6 feet as an adult. But compared to an alligator, which can reach 11.2 feet, otters are still small and don’t weigh as much.

Regardless of its size and weight, a giant river otter can take an alligator or anaconda down. They have the advantage of hunting in groups, but an individual otter too can kill an alligator!

Giant river otters have sharp teeth that can bite into thick skin like that of the alligator. Their pointy claws also help them hold their prey in place. Otters love to eat! So to them, all, food is good food!

Otters use their adorable little paws as eye masks

Otters are carnivores, but they are also very cute to look at! Like most carnivores, otters are more active during the night than day. Their days are spent lazing, floating, and resting with the waves in the ocean and the gentle ripples of the rivers.

But it’s too bright and sunny during the daytime! So, their paws act as an eye mask and help them block the light to achieve a cozy and comfortable sleep!

Otters have their own unique sounds to communicate with each other. Using different noises, an otter can give directions, call for help, amuse each other, and alert for danger!

Otter pups use a slightly different vocabulary that largely consists of baby blabber. These noises play an important role! It helps the otter mommies understand if their pup is hungry, scared, or ill.

Otters have 22 sounds that they use for different situations. Additionally, the pups have 11 other noises of their own.

Isn’t that super cool? Otters love a hearty meal, and what’s better than a fish or a clam? A Sea Urchin! Earlier I told you that otters wrap themselves in kelp. This kelp is one of the most oxygen-generating plants in the world. These forests need protection.

Sea urchins love eating seaweeds. If the number of sea urchins increases, there will be less kelp. And fewer kelp forests will lead to more carbon dioxide in the atmosphere. Sea otters hunt down sea urchins and eat them. Aren’t otter superheroes that fight evil and save the environment?

The food chain balance in the ecosystem is one of the most crucial factors in controlling climate change. Only one of the 13 otter species is not in danger. The other 12 have decreasing populations all around the globe. There are organizations around the world that are devoted to the cause of saving the otter species.

If you ever come across a healthy kelp forest near the coast of California or elsewhere in the world, thank the otters!

How can we help save the otters?

Goat Facts For Kids That Will Baffle You

Crocodile Facts For Kids That Will Surprise You

Chameleon Facts For Kids That Will Blow Your Mind