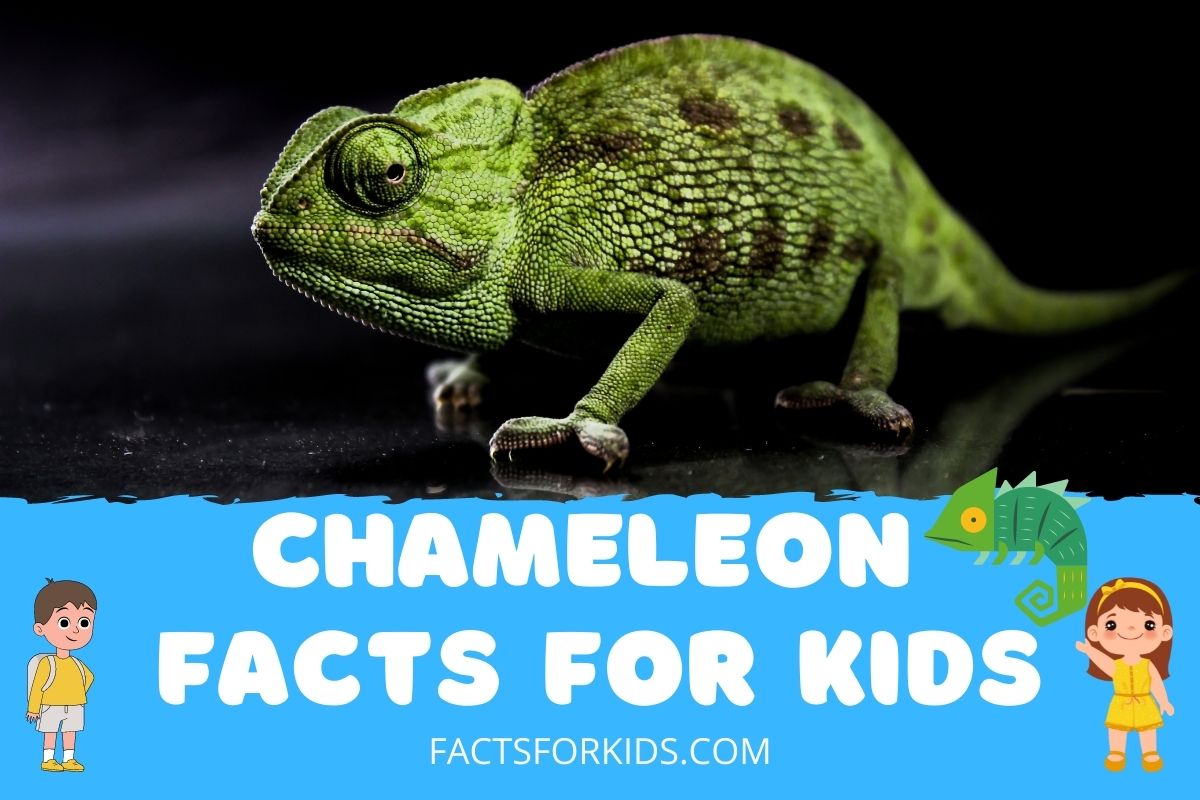 Ever got accused of the chameleon expression? It’s the classic “you change your colors like a chameleon.” What do you think it means? And. Wait a minute. Does a chameleon actually keep changing its colors on a whim? Why do they change colors? And how are they able to pull off such cool things? You must be very curious. So, let us make the facts clear for you.

But before jumping straight into the facts, let’s just begin by answering what a chameleon is. Chameleons are a group of tree-dwelling lizards best known for their unique ability to change colors.

But indeed, chameleons are great sight of wonder. Not only can they change their colors, but there are just so many other reasons that make them extraordinary creatures. Let’s find out all the wonderful features of a chameleon with these quick facts.

1. Chameleons do not change color to blend in with their surroundings 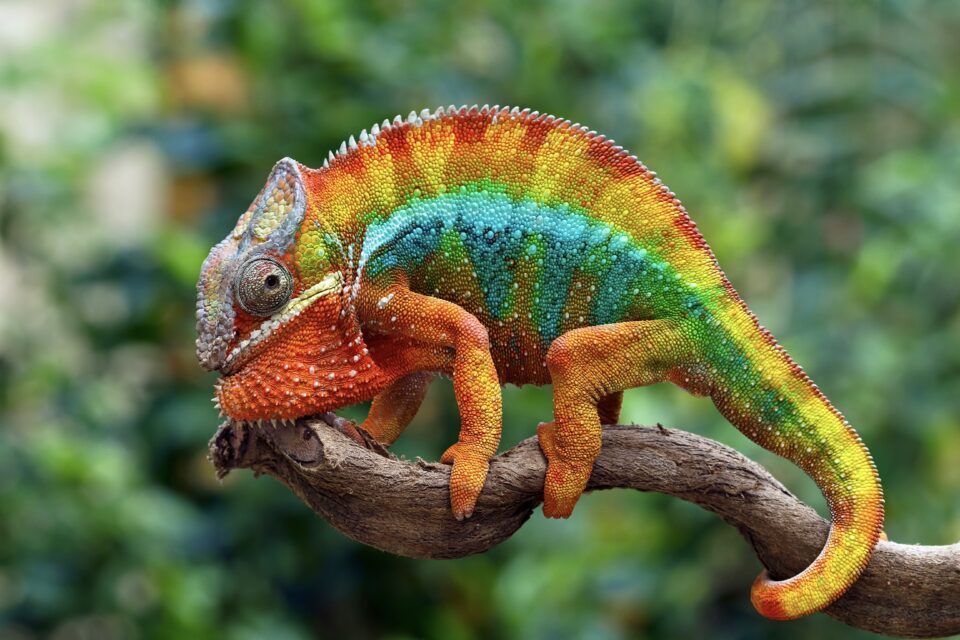 Perhaps this popular misunderstanding is the greatest deception that the color-changing Chameleon has ever achieved. They have deceived humans into thinking they change their colors as camouflage when they actually do not.

The answer is that such color changes help them regulate their body temperature. It helps them warm-up or cool down. It also serves as their mood indicator and is sometimes used as a quirky way to attract mates.

2. Chameleons have special cells to help them change colors

So how do they actually manage to pull off a vibrant combination of beautiful colors on their body? Specialized skin cells called chromatophores are the secret master behind the scenes.

Nerve impulse or hormonal release allows these chromatophores to move and expand. As a result, these movements produce different color combinations. You will be amazed to find all the colorful chameleons if you search them up on the internet!

3. The Chameleon has a very long tongue

This should be the Chameleon’s second-best feature that sets them apart from other animals. They have a remarkably long and sticky tongue that can stretch as much as two times the length of their own body size. They have the longest tongue-to-body size ratio of all animals. And this feature has its best use when the Chameleon goes hunting for prey.

Saw a prey insect lurking around? Stretch your long sticky tongue and take them down! Basically, that’s what a chameleon does to catch its prey. A chameleon’s tongue is quite fast, and it can accelerate from 0 to 60mph in less than 0.01 seconds to grab on to its prey.

This unique system of tongue-hunting is made possible only by a specialized set of muscles that helps the Chameleon shoot out and retract their tongues easily. A very useful feature, indeed!

Nothing can beat a chameleon when it comes to doing amazing things or simply being their amazing selves. Their pair of eyes is the next in line from their long list of amazing features.

A chameleon has some unique eyelids of its own. The top and bottom lids are fused, with only a hole-sized pupil serving as the eye. A chameleon can focus on two different objects at the same time. The eyes have a huge degree of rotation that offers them a full 360-degree vision.

This enables them to focus on two different things at once. These eyes come in handy when the Chameleon is on the lookout for prey or when it needs to keep itself hidden from becoming prey itself.

Unlike other lizards who can easily shed off their tails and grow them back, a chameleon cannot simply regrow their tails. So, if it’s once lost, it’s forever gone case for them.

Chameleons have beautiful tails. But its beauty is not its only merit. They have a special prehensile tail that can easily wrap around tree branches. This feature helps a great deal when climbing trees or moving about switching between tree branches. It’s also one of the reasons why chameleons cannot easily regrow their tails like other lizards.

A chameleon also tightly coils up its tail if it sees its enemy chameleon. This is simply a no-word way to communicate aggression. We cannot marvel at it enough!

6. Chameleons do not have ears

A chameleon’s head is highly ornamented. Observe it closely, and you will find so many interesting structures on their heads. But look as best as you want. You will still not be able to locate a visible ear on their heads.

They do not have ears or eardrums. So, how do they catch up on sounds without an ear? Good question. Chameleons aren’t completely deaf. They can hear a small range of sounds from 200-600 Hz. But most of the time, they feel the vibrations to make sense of the sound. Wait. Is this what you call feeling the music and taking in the sound? A great wonder indeed.

7. You can easily identify the gender of a chameleon

Animals differ greatly. You can easily point out their gender in most cases. In contrast, it takes some digging around to establish this difference in a few rare cases. Fortunately for us, a chameleon comes under the first situation. You can easily tell the difference between a male and a female chameleon.

A male chameleon will usually have extra horns and spikes on their bodies, whereas a female won’t. Male also tend to be larger and more brightly colored than a female.

8. Most species of chameleons lay eggs

The Chameleon is a member of the reptile family. And just like any other reptile, they also give birth to their young ones by laying eggs. On average, a chameleon can lay 20 eggs at a time that takes around 6 to 9 months to hatch. But not all chameleons follow the crowd. There are some exceptions against laying eggs. One such instance is listed in the following fact.

Although most reptiles give birth to their young ones by laying eggs. Some exceptions do not follow the rules. The Jackson’s Chameleon is one of those few exceptions.

These species can give birth to 8 – 30 babies at a time after undergoing a gestation period of four to six months. These babies initially start as eggs. But instead of laying them out of the mother’s body, they are incubated inside the mother’s body and eventually come out as live births.

Chameleons belong to the family of tree-hugging reptiles. They spend most of their lives on trees and among bushes. So, it won’t be a big surprise if they have some special way to get their way around jumping between the trees. Right?

A chameleon’s feet have two bundles of fused toes. These fused bundles come in groups of two and three toes and are arranged opposite each other. Such arrangement gives their feet a claw-like structure that makes them firmly grip vines and branches. This helps their navigation through trees quicker and easier.

These colorful and solitary-living lizards come in a huge range of sizes, colors, habitats, and features. There are more than 150 different species of chameleons known to us. They live in the warm forest as well as deserts. And what’s more, people are even rearing them up as pets too.

12. Most of the chameleons live in Madagascar

67 of the world’s 202 known species of chameleons are identified exclusively in Madagascar. That’s almost one-third of the total population. And it’s huge.

Madagascar is best known for housing unique species of animals. Almost 70% of the species inhabiting these islands are totally unique. The rich biodiversity nurtured by its tropical location makes it the most suitable location for various species. And Chameleon being a tree-loving lizard, couldn’t find any place better than this.

13. Chameleons have an average lifespan of 2-7 years

No matter how wonderful a chameleon might be, the average lifespan of a chameleon is only 2 – 7 years. The Parson’s Chameleon is considered the longest living Chameleon. The male lives up to 9 years, and the female can live up to 8 years. At the other end of the spectrum, we have Labord’s Chameleon, who can only live for 4-5 months.

14. Chameleons are also kept as pets

Their fascinating ability to change colors is a great site of attraction for humans. It is also one of the many reasons people prefer to keep them as pets. Moreover, keeping them as a pet and caring for them is also legally approved by law. But chameleons are high-maintenance creatures by nature. It’s not an easy feat to keep them as a pet.

15. The Veiled Chameleon is the most popular chameleon pet

Veiled chameleons are known for their quiet and docile temperament. They have a vibrantly striped green body adorned with a “crown-like hood” on their head. This “crown-like hood” structure is the reason why they are named Veiled Chameleons.

These chameleons love to have their own peace and can show signs of distress if disturbed or over-handled. So do refrain yourselves from disturbing their peace if you ever choose to turn this Chameleon into a pet in the future.

16. Chameleons are not social animals

Chameleons love to be on their own. They don’t like mingling with other animals and prefer to live a solitary life. Two chameleons kept together in a common nest is a huge NO for the pet owners. They absolutely hate anyone encroaching upon their private space, and they do not shy away from expressing their hostility by changing their colors.

Even a male and female Chameleon do not get along well if kept together for long. A huge fight will rake havoc if a chameleon gets too angry.

As such, they can only depend on environmental heat sources to heat themselves or cold sources to cool down. And their color-changing ability comes in handy. A chameleon may darken themselves while sunbathing or make themselves transparent to reflect the sun’s heat.

Chameleons and their small bodies do not necessarily require a lot of water for survival. They can easily pass their days by intaking droplets from leaves instead of looking for a steady source of water from a pool or stream.

19. Chameleons use body language to communicate

We know chameleons aren’t the best social creatures, but they do communicate their aggression, pleasure, and distress through a fascinating change of color and some interesting body language.

Too dark or too bright a color communicates signs of stress, and moderate color stands for a happy and relaxed chameleon mood. A chameleon curling its tail around a branch communicates happiness, and curling around itself is a sign of them feeling threatened. Observing a chameleon with their emotions can sometimes turn out to be an eye-feast for pet owners because these creatures are simply so cute and adorable.

20. Some species of chameleons have very vibrant colors

There are quite some fascinating species of chameleons who can change their colors into a vibrant combination of blue, green, black, orange, yellow, pink, red, and brown. The Panther Chameleon is one such species that are native to the Northern and Eastern parts of Madagascar.

The word ‘Chameleon’ is derived from the Greek words’ Chamai’ and ‘Leon’, which together translate as ‘earth lion.’ ‘Chamai’ stands for earth, and ‘Leon’ stands for lion.

22. Chameleons are facing threats to their survival

All things said and done; we find the Chameleon to be a fascinating creature. We are now done with the facts. So, what comes next? Of course, we will search the web for their pictures and gush at their wonderful colors and size. And some people might even end up adopting them as a pet. Then it will be more interesting to uncover more such facts by observing the behavior of your pet chameleon.