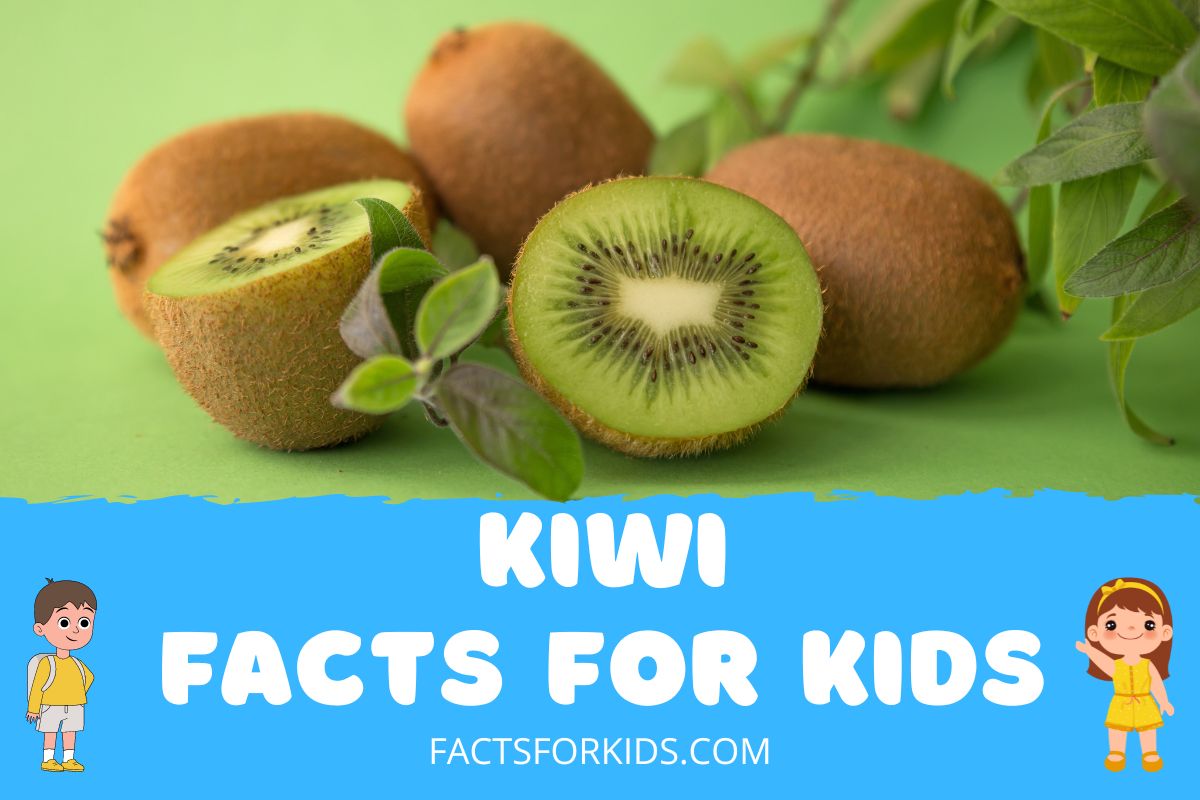 Kiwi fruit is a delicious and nutritious snack that is enjoyed by people of all ages. They are packed with vitamins and minerals, and they’re deliciously sweet and tangy. In this article, we’ve gathered a bunch of interesting facts about these delicious little fruits that will engage and entertain your child.

Contents show
1. Kiwis have Chinese origins
2. “Kiwi” is the name of the bird, too!
3. Kiwis were earlier called “Chinese Gooseberry”
4. Kiwis are beneficial for your eyes
5. 80% of kiwifruit is just water!
6. All parts of kiwifruits are edible to us
7. “Baby Kiwis” are separate fruits in the Kiwi family
8. Kiwis are strongly recommended for pregnant women
9. Kiwi skin is an effective meat tenderizer
10. Not all kiwis have green flesh!
11. Some people are allergic to kiwifruits
12. If someone is allergic to kiwis, they’d also be allergic to latex!
13. China is the leading producer of kiwifruits in the world
14. Kiwis are the national fruit of China
15. Kiwis were first introduced in America in the 1900s
16. California is the leading kiwi-producing state in the United States
17. December 21st is celebrated as “National Kiwifruit Day” 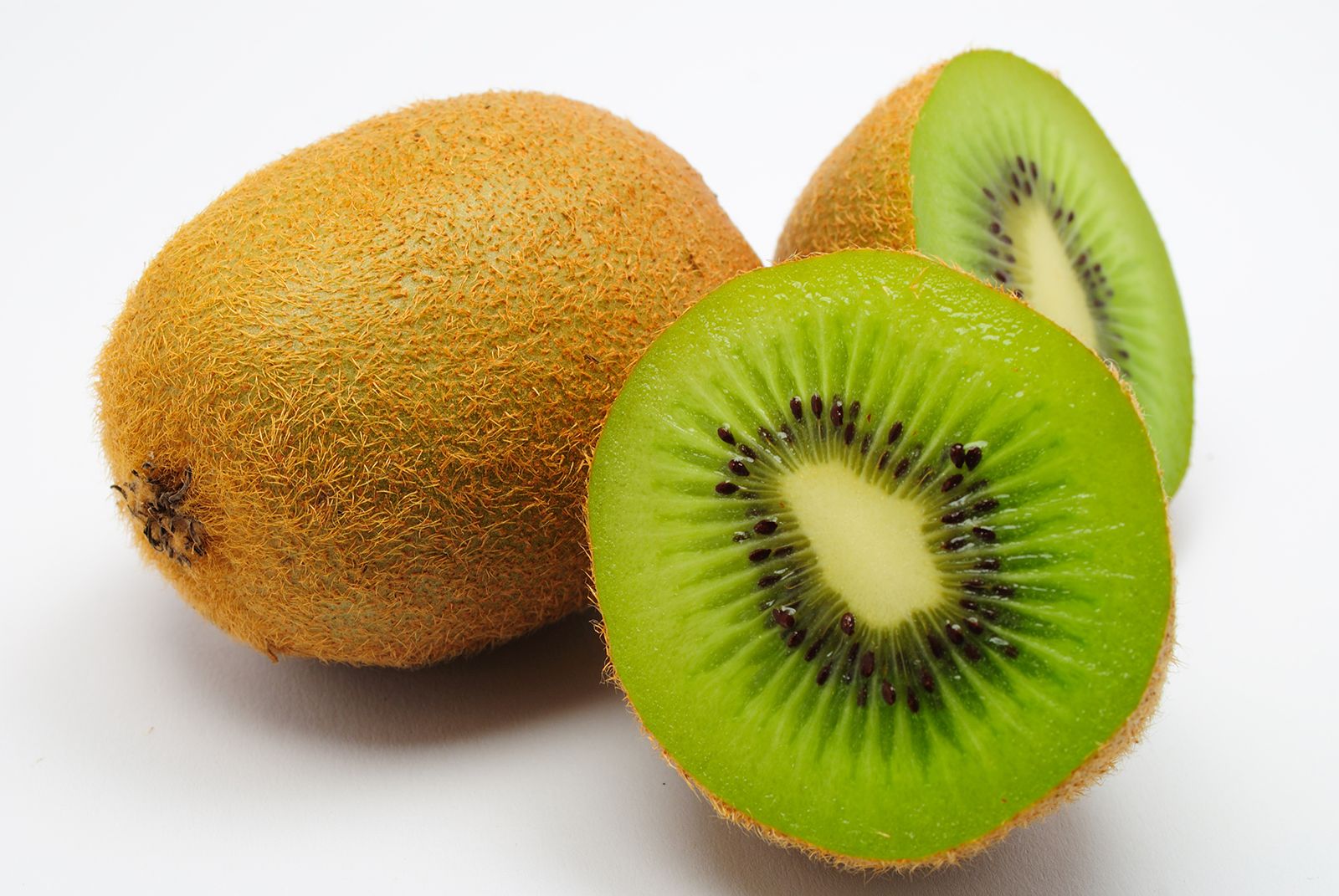 The origins of kiwis can be traced back to the central and eastern parts of China. Researchers have found mentions of these fruits dating back to the 12th century, during the rule of the Song dynasty. During those days, kiwis were not cultivated for consumption but merely collected from the forests for their medicinal use. 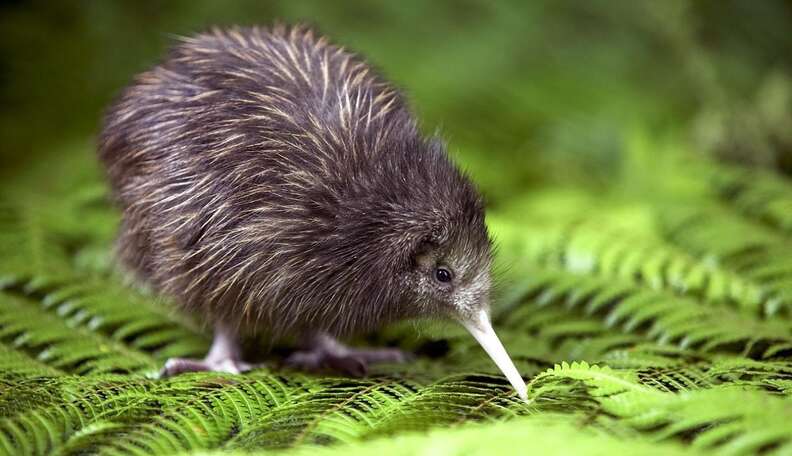 If you look up kiwi on the web, you’ll find two different kinds of results: the fruits and the birds. Does that make you wonder which of the two was named after the other one? Find its answer in the next fact!

Did you know that the fruits that you commonly call kiwifruits today were once called Chinese Gooseberries? Yes, we’re telling the truth.

Chinese Gooseberries were the first name of these fruits, which made sense seeing as they have originated in the country. However, in 1959, the similarities between these fruits and the Kiwi bird were first noticed. Both had a brown, fuzzy appearance.

Keeping these similarities in mind, the people of New Zealand decided to name the fruits after kiwi birds, that was the national bird of the country.

4. Kiwis are beneficial for your eyes

Do you know why eating a kiwi can do wonders for your eye health? It is because these fruits contain two carotenoids – Lutein and Zeaxanthin – which are also referred to as eye vitamins.

These carotenoids can absorb all the extra light in our eyes, preventing our retinas from any damage, which could eventually lead to eye diseases like Cataracts in the long run.

The water content of kiwifruits is higher than our own bodies! The nutritional breakdown of these fruits has revealed that water accounts for 83 grams of a total of 100 grams of kiwis.

6. All parts of kiwifruits are edible to us

Most of the fruits that we eat today need some kind of preparation. You’ll either need to peel them off, remove their seeds, or chop off their rind. However, when it comes to kiwifruits, you can bite into them right away (as long as you’ve washed them first).

This is because all parts of these fruits, including their skin and seeds, are both edible as well as nutritious. That being said, it’s best to purchase organic kiwis if you plan to eat them whole since the commercially-grown fruits could potentially contain pesticides on their skin.

7. “Baby Kiwis” are separate fruits in the Kiwi family 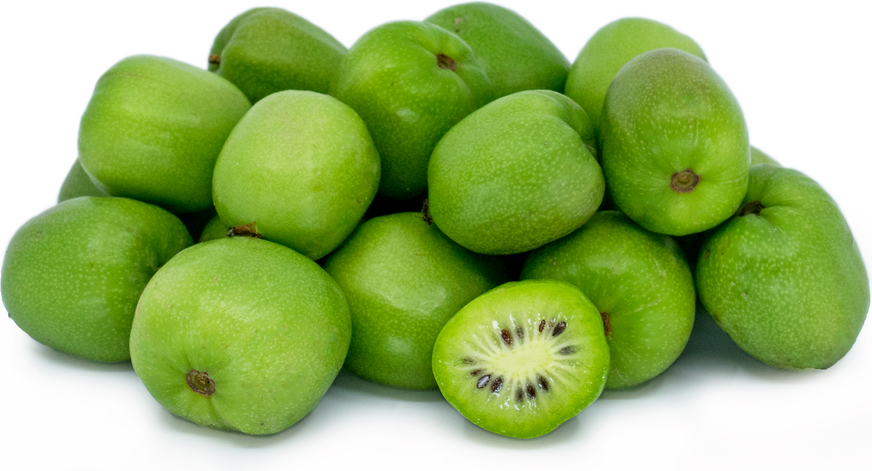 When you hear the term Baby Kiwi, what’s the first thought that comes to mind? Perhaps you’d guess that these fruits are simply the immature version of the fuzzy kiwifruits we eat, like baby corn, wouldn’t you? Well, if that’s your guess, it’s wrong.

Baby Kiwis, more commonly known as Kiwi Berries and Dessert Kiwis, are separate fruits whose plants belong to the same family as the fuzzy kiwifruits. However, they’re much smaller in size (almost similar to a large grape) and have smooth, green outer skin.

Another difference between Kiwifruits and Kiwi Berries is that the vines of the latter grow much faster than the former.

Women, when they’re pregnant, take a daily supplement of folic acid. But why is folic acid so important? This nutrient facilitates cognitive development in their baby and prevents the risk of neural tube defects.

However, research has shown that the kiwis have such a rich folic acid content that including the acid in their daily diet can be just effective as taking the supplements.

We just learned that all parts of kiwifruits, including their outer skin, are edible. Would you like to learn about another interesting use of kiwi skin?

Just rub it on meat a couple of hours before cooking it, and your dish will turn out tenderer than ever! Wondering how it happens? It is because kiwifruits have a special soluble protein called Actinid, which can help break down the collagens of meat, thereby making it juicier and tenderer.

10. Not all kiwis have green flesh!

It is common knowledge that kiwis are green-fleshed fruits, isn’t it? Well, this might come as a surprise to many of you, but there’s a kiwi variety with yellow flesh!

These are called Golden Kiwifruits, and have a sweeter taste than the regular kiwis. They were first introduced in the Japanese markets in 1998; their export to the European and American countries began in 2000.

11. Some people are allergic to kiwifruits

Kiwis are such delectable fruits that it’s difficult to imagine how anyone could be allergic to them. But if you look at it scientifically, you’ll learn that these fruits have as many as 13 different kinds of allergens!

Kiwi allergy is also quite common in the country. Studies have shown that about 60% of the children who are allergic to other fruits or vegetables are also allergic to kiwifruits.

Have you ever heard of the latex-fruit allergy syndrome? It is a theory based on clinical observations which indicate that people who are allergic to latex are also allergic to some fresh fruits.

The fruits that are included in this list include bananas, avocados, pineapples, papayas, and kiwis.

13. China is the leading producer of kiwifruits in the world

China, the country where the origins of kiwifruits lie, is also the leading producer of these fruits in the world. This Asian country is followed by New Zealand, Italy, and Greece; however, none of them are even close to matching their numbers.

14. Kiwis are the national fruit of China

China has declared kiwifruits to be the national fruit of their country. It makes a lot of sense these fruits have both originated in their country and are produced in the largest numbers there.

15. Kiwis were first introduced in America in the 1900s

We discussed earlier how evidence of kiwis’ existence in China could be dated back to the 12th century. But did you know that it took these fruits another 8 centuries to find their way to America?

During World War II, the American soldiers stationed in New Zealand tasted kiwis for the first time. Soon, these fruits became popular among them, which led to their first export to America in 1906.

16. California is the leading kiwi-producing state in the United States

The United States of America ranks 10th on the list of the kiwi-producing countries in the world, and it’s all thanks to California. The Golden State accounts for 98% of total kiwi production in the nation and is, therefore, the leading kiwi-producing state.

Because Kiwis are winter fruits, National Kiwifruit Day is celebrated on December 21st every year, which also marks the onset of winter (the Winter Solstice). Isn’t that a beautiful symbolism?

20 Blueberry Facts For Kids That Are Fun To Know