Are you looking for some fascinating facts about beluga whales? These amazing creatures are known for their distinctive white color, complex vocalizations, and playful nature. From their unique anatomy to their social habits, beluga whales have many interesting traits that make them one of the most fascinating animals in the ocean.

In this blog post, we’ll explore a bunch of interesting facts about Beluga Whales that kids will love. So dive in and discover the amazing world of these amazing animals!

1. Beluga whales are also called white whales because of their distinctive white color. 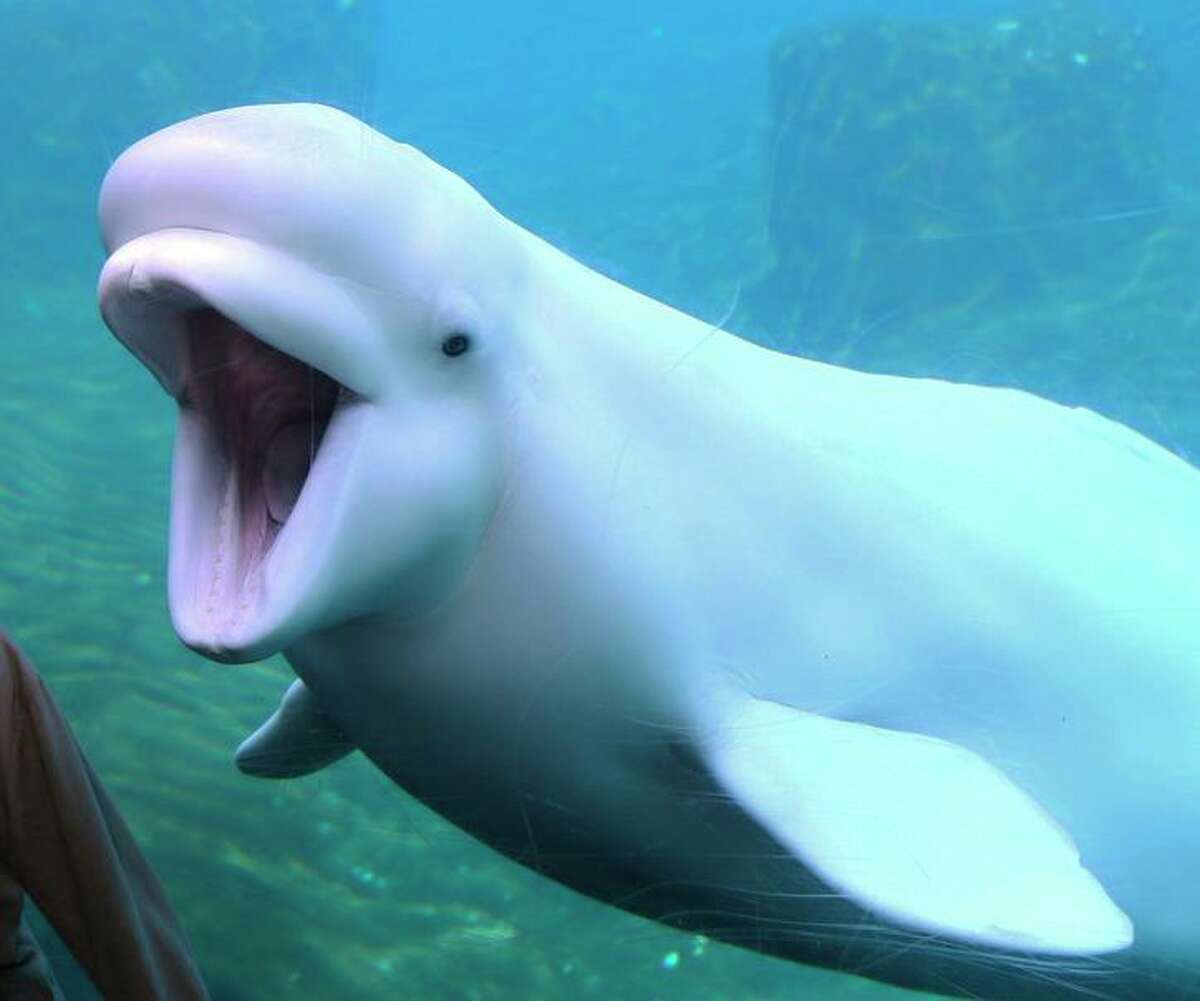 Beluga whales are also known as white whales because of their distinctive white color. As they grow older, beluga whales lose the dark gray color of their youth and turn white. This makes them the only species of whales that are white in color.

The white coloration of the skin of beluga whales is an adaptation to their environment, specifically the Arctic waters where they live. This coloration helps them to blend in with their surroundings, which can provide them with some protection against predators such as polar bears and killer whales.

2. Beluga whales are native to the Arctic and sub-Arctic waters of the northern hemisphere.

Yes, that is correct. Beluga whales are well-adapted to life in the cold, icy waters of the Arctic and sub-Arctic. They are able to swim among icebergs and ice floes in waters that may have temperatures as low as 0°C. This is possible because of the thick layer of blubber that beluga whales have, which helps keep them warm in cold waters.

In addition to their blubber, beluga whales also have small teeth and flexible necks, which allows them to feed on a variety of fish, crustaceans, and mollusks. These adaptions have allowed beluga whales to thrive in their cold, northern habitat. 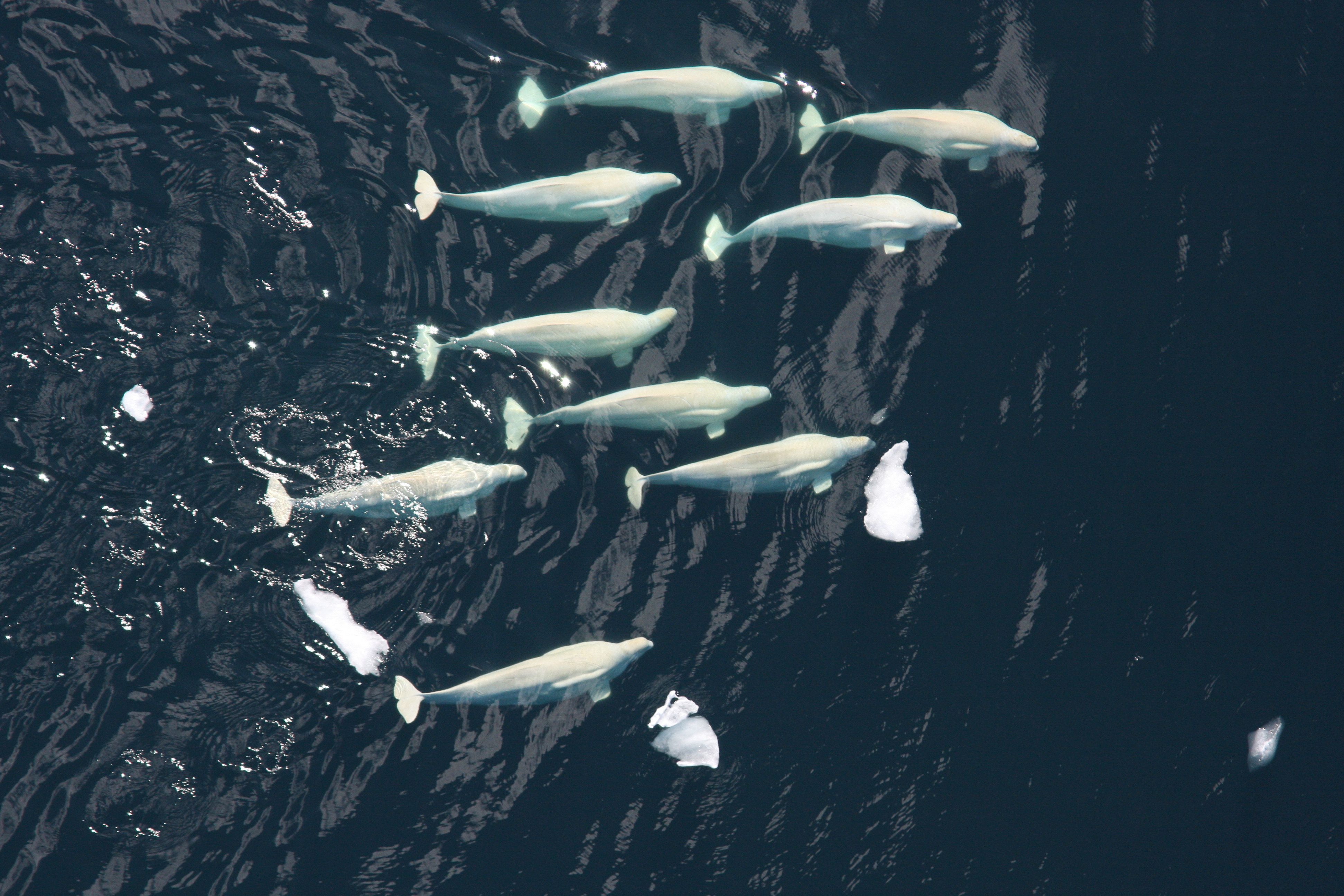 Beluga whales are highly social animals and are often seen in groups known as pods. These pods can vary in size, but they typically consist of several individuals, ranging from just a few individuals to several hundred.

Beluga whales are known to form strong bonds with other members of their pod, and they rely on these social connections for protection, hunting, and other activities. Pods of beluga whales can be found in many different regions of the world, including the Arctic, the North Atlantic, and the North Pacific.

Beluga whales are also known to form temporary pods when they come together for mating or other activities. These temporary pods can be much larger than regular pods, and they can consist of hundreds or even thousands of individuals.

4. Beluga whales have a rounded forehead called a “melon” that they use to produce sound and echolocation.

The beluga whale’s melon is highly flexible and can change shape, which allows the whale to produce a wide range of sounds. Beluga whales use these sounds for communication, navigation, and hunting, and the melon helps them to focus and direct these sounds.

In addition to its role in sound production, the melon also serves as a fat reserve for beluga whales, which can be important for survival during lean times.

5. Beluga whales are known as sea canaries for their unique ability to make a wide variety of vocalizations, including chirps, clicks, and whistles.

Beluga whales are sometimes referred to as “sea canaries” because of their unique ability to make a wide variety of vocalizations, including chirps, clicks, and whistles.

These vocalizations allow beluga whales to communicate with each other and navigate their environment using echolocation. Beluga whales are known for their complex vocalizations, which are often described as being similar to the calls of birds, hence the nickname “sea canaries.”

6. Unlike other whales, belugas can move their heads from side to side because they have flexible necks.

Beluga whales have flexible neck that allows them to move their heads in a variety of directions. The neck vertebrae of a beluga whale are not fused, as they are in most cetaceans which makes it very flexible. This is a unique feature among whales, as most species have a more rigid neck that is not as flexible.

The flexible neck of the beluga whale is thought to be an adaptation that allows them to feed on a variety of prey, including fish, crustaceans, and mollusks. In addition to their flexible neck, beluga whales are also known for their complex vocalizations, which include clicks, whistles, and chirps.

These vocalizations allow beluga whales to communicate with each other and navigate their environment using echolocation. Overall, the flexible neck of the beluga whale is an interesting and unique aspect of their anatomy.

Similar to Dolphins, Beluga whales are able to swim backward, which is a unique ability among whale species. This ability is thought to be an adaptation to the beluga whale’s environment, as it allows them to navigate their surroundings more effectively.

Belugas, like other arctic whales, do not have dorsal fins, which would be a hindrance in their environment. Instead, they have a tough dorsal ridge that provides some support for their body while they are swimming.

Beluga whales are not known for their speed. They are slow swimmers compared to other species of whales, and they typically swim at speeds of around 5-10 miles per hour. In short bursts, they may be able to swim slightly faster, but they are not built for a sustained high-speed movement like dolphins or some other species of whales.

Their slow speed is actually an adaptation that helps them survive in the cold Arctic waters, where their large bodies and thick blubber help them to conserve heat and energy.

9. Beluga whales have a thick layer of blubber that helps keep them warm in the cold Arctic waters. 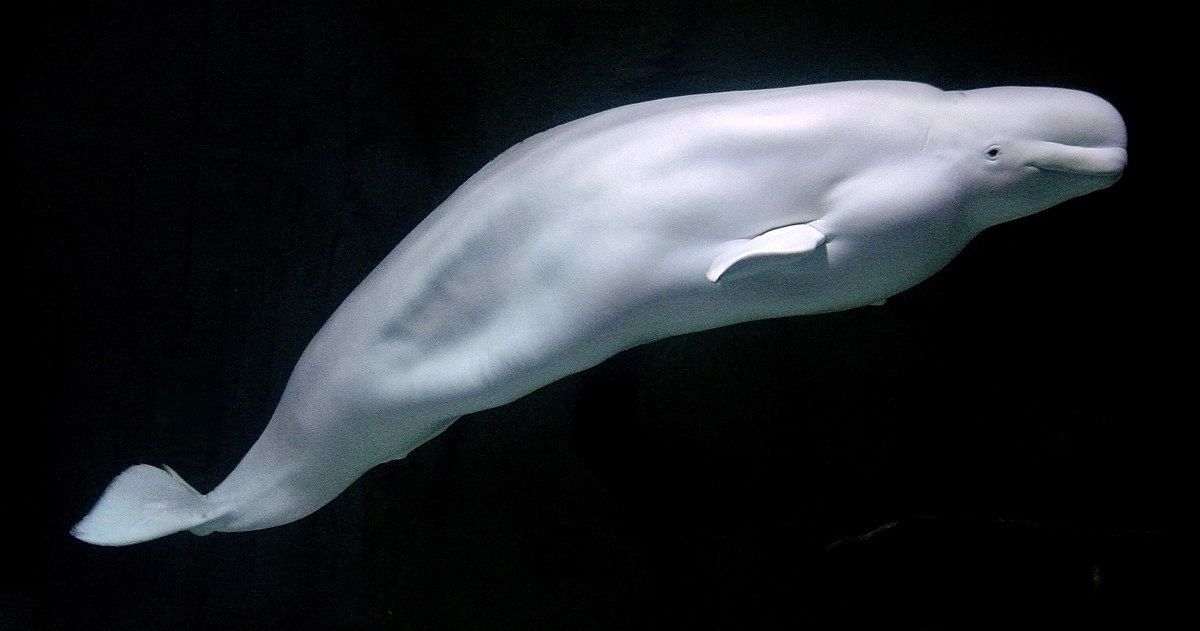 Beluga whales have a thick layer of fat called blubber. It serves several important functions for these animals, including providing insulation to help them maintain their body heat in cold water, storing energy as a source of fuel, and providing buoyancy to help them float.

In beluga whales, blubber is especially important because it helps them survive in the cold waters of the Arctic and sub-Arctic regions where they live. The blubber layer is located just beneath the whale’s skin, and it can be several inches thick in some individuals.

10. Beluga whales are closely related to narwhals, dolphins, and porpoises.

Beluga whales, narwhals, dolphins, and porpoises are all types of aquatic mammals known as cetaceans. They are closely related to one another and belong to the same scientific order, called Cetacea. All of these animals are highly adapted for life in the water and have evolved a number of physical characteristics that enable them to swim and navigate through the ocean.

One of the most obvious similarities between these animals is their streamlined body shape, which helps them move efficiently through the water. They also have flippers for swimming and a powerful tail, called a fluke, that they use to propel themselves forward. In addition, all of these animals have a blowhole on the top of their head, which they use to breathe when they are at the surface of the water.

Another important feature that beluga whales, narwhals, dolphins, and porpoises have in common is their highly developed sense of hearing. All of these animals have evolved large, sensitive ears that allow them to hear sounds underwater, which they use for communication, navigation, and detecting prey. They also have excellent eyesight and a keen sense of touch, which help them navigate and hunt in the ocean.

11. Beluga whales are known to be playful and curious and often approach boats and other objects in their environment.

Beluga whales are known for their playful and curious nature. These whales are highly social animals and are often seen playing and interacting with other members of their pod.

They are known to engage in a variety of playful behaviors, such as breaching (jumping out of the water), tail slapping, and spyhopping (rising vertically out of the water to look around).

Beluga whales are also known to be curious and will often approach boats and other objects in their environment to investigate. This playful and curious nature has made beluga whales a popular attraction at marine parks and aquariums around the world.

The size of an individual beluga whale can vary depending on factors such as age, gender, and geographical location. Beluga whales are opportunistic feeders, which means that they will feed on a wide variety of prey depending on what is available in their environment. These whales are carnivores and primarily feed on fish, crustaceans, and mollusks.

They are known to eat a variety of species, including salmon, herring, cod, shrimp, and crabs. In some cases, beluga whales have been known to hunt in groups, working together to herd their prey and make it easier to catch. They are also known to feed on the bottom of the ocean, using their powerful jaws to crush the shells of their prey.

Beluga whales are long-lived animals and have a lifespan of around 30 to 50 years in the wild. However, their lifespan can vary depending on factors such as the environment they live in and the availability of food. For example, beluga whales that live in cold, northern waters and have access to plenty of food tend to live longer than those that live in warmer, southern waters and have less food available to them.

It is also worth noting that beluga whales in captivity, such as those kept in aquariums or marine parks, may have a different lifespan than those in the wild. In captivity, beluga whales may live for a shorter or longer period of time, depending on the conditions of their enclosure and the care they receive.

In summary, the lifespan of a beluga whale can range from 30 to 50 years in the wild, but this can vary depending on factors such as the animal’s health and the environment it lives in. Beluga whales in captivity may have a different lifespan than those in the wild.

15. Beluga whales are a cultural symbol for the Inuit people.

The Inuit also have a rich cultural tradition surrounding beluga whales, including stories, songs, and art that depict the whales. Today, beluga whales continue to play an important role in the culture and livelihood of the Inuit people.

16. Beluga whales are a popular attraction at aquariums and marine parks.

Many aquariums and marine parks have beluga whale exhibits where visitors can see the whales up close and learn about their biology and behavior. Beluga whales are relatively small and easy to keep in captivity, which makes them a good choice for aquariums. These whales are known for their playful and curious nature, which makes them interesting and engaging for visitors to watch.

12 Hammerhead Shark Facts for Kids to Swim Through