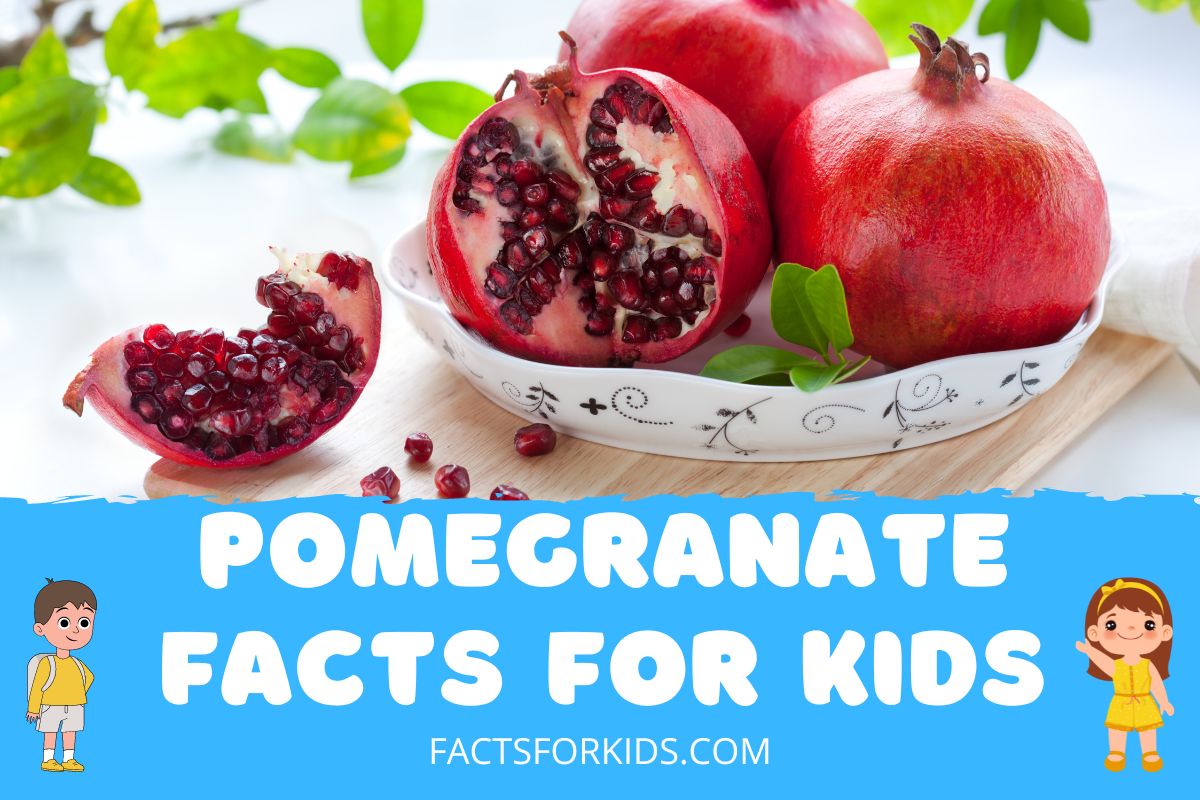 Kids love learning random bits of information, and pomegranates are a fruit that is full of surprises. In this article, we’ve gathered lots of fun facts about pomegranates that will engage and amuse your little one. Who knows, they may even become a pomegranate fanatic after reading this!

1. The term “pomegranate” has Latin origins

Do you know what the term pomegranate means? Yes, it’s the name of a fruit, but how did this fruit come to be named pomegranate? Well, it has been derived from two medieval Latin terms: pomum, which means apple, and granatum means seeded.

So, pomegranates were basically called seeded apples, which makes sense because of two reasons:
• Apple was a generic term for all fruits (other than berries) up until the 17th century.
• The inside of the pomegranate is indeed filled with seeds.

2. Pomegranates have originated in the Middle East Being tropical fruits, it’s no surprise that pomegranates originated in the Middle East, where the climate was ideal for their growth. Some historians claim that Persia is the kingdom of their origin, but there’s little substantial evidence to verify that.

Wherever these fruits might have originated, they quickly spread throughout the Mediterranean and were soon found in China, Arabia, Afghanistan, and India.

3. Pomegranates are botanically categorized as a berry

The image of berries in your head might consist of small, brightly-colored fruits with juicy pulp. But that’s not how the botanists define it; according to them, true berries originate from a single-ovaried flower and have many seeds. Pomegranates fit this description perfectly and are, therefore, botanically categorized as berries.

Many of you might already know this, but it is the seeds of pomegranates that are primarily edible to us. These bright red seeds are also referred to as arils and have a juicy, sweet taste with an occasional touch of tart.

A single pomegranate can have anywhere between 200 and 1,400 seeds. Did you know that the thin white flesh that surrounds these seeds is also edible? But because they taste so bitter, most people throw them away.

5. Pomegranates are a storehouse of antioxidants

These antioxidants lend these fruits anti-inflammatory, anti-atherogenic, and anti-hypertensive properties, making them a healthy addition to your diet.

6. The pomegranate trees can live as long as 200 years!

Pomegranates are durable fruits and can last up to 2 months in the refrigerator. What if we told you that their durability is nothing when compared to that of the trees on which they grow?

The pomegranate trees have a very long lifespan and can live up to 200 years. However, they don’t bear fruit for that long; their peak fruition period lasts only 12-15 years.

7. Pomegranate seeds have a long history of use in traditional medicines

This might come as a surprise to many of you, but long before pomegranates were consumed as fruits, they played an indispensable role in the traditional medicinal practices in Asian countries. In fact, humans’ first association with these fruits was significant for their use in medicine and not direct consumption as a fruit.

8. The Spanish name of Pomegranates is also the name of a Spanish city

The capital city of the Province of Grenada in Spain is named Granada. Oddly enough, grenada is also the Spanish name for pomegranates. It could perhaps be because of this reason that these fruits are the heraldic device of the city.

Yes, pomegranates don’t always need your help to crack them open. But if you’re thinking they’d explode randomly with all their seeds flying haywire, that’s not how it works.

Calling it split open would be more appropriate. Many pomegranate farmers have reported that these fruits are often found split open while hanging on the trees a little before their harvesting time. Some of them believe that this happens when they become overripe, which is not true.

The real reason behind pomegranates splitting themselves open is irrigational irregularity. Here’s how it happens:

When the trees get lesser water than it needs, the outer peels of their fruits stop growing. And later on, when ample water is provided, the seeds inside the fruits continue to expand and can end up rupturing their leathery peel, resulting in a split.

In addition to enriching their diet, the pomegranates fulfilled another important purpose for the Ancient Romans. To them, pomegranate juice was also a potent dye!

This worked well for the Romans (and many others who came after them) because pomegranates have a high tannin content (19-26%) and can dye cotton and other plant-based fibers quite well. You can also use it on silk and wool, but the result might not be as impressive.

11. Romans also used the rind and root of pomegranates to treat tapeworm

We’ve just discussed a peculiar use of pomegranates by the Romans. Want to hear another one? This one doesn’t involve the fruit’s juice but its rind and root.

Ancient Romans had a special recipe that could treat diarrhea and tapeworm. And while we cannot extract the original recipe, it was found that the roots and rind of pomegranates were its primary ingredients.

More proof of this being true lies in the Ebers Papyrus, an Egyptian medical papyrus from 1550 BC. It has the record of the herbal knowledge used at the time of the Egyptians and also talks of pomegranate rind being an effective treatment for tapeworms.

12. The pomegranate bonsai is one of the most popular bonsais in Japan

Do you know how tall the pomegranate trees grow? Well, their height generally ranges between 16 and 33 feet. However, what if we told you that these trees come in much smaller sizes as well? Say, 1-2 feet?

We’re talking about the pomegranate bonsai. These bonsais are quite popular throughout Japan, which is considered the homeland of bonsai. Pomegranate bonsai trees are majestic! Despite being so tiny, they have thick trunks, lush green leaves, and even bear fruits! Wouldn’t it be amazing to grow one in your home?

13. The Chinese saw pomegranates as a symbol of fertility

Pomegranates were introduced to China during the ruling period of the Han Dynasty and were seen as symbolic of fertility by the people of the country, a tradition that remains prevalent even today. Many Chinese households hang paintings of bursting pomegranates to bless their offspring with wisdom and positive energy.

14. The Greeks called pomegranates “the fruit of the dead”

The Greeks seemed to see pomegranates in a much different light than the Chinese. The main reason behind it lies in their mythology.

Greek mythology conveyed that the pomegranates had originated from the blood of Adonis as he was dying in the arms of his immortal lover, Aphrodite. Due to the nature of their origin, the Greeks called these fruits the fruit of the dead.

15. In Hindu mythology, pomegranates are associated with the Earth Goddess

Much like in China, pomegranates are also seen as symbolic of prosperity and fertility in India. In fact, Hindu mythology links these fruits to Bhoomidevi or Vasundhara, the Earth Goddess who holds pomegranates in one of her four arms.

16. The heaviest pomegranate in the world weighs 5.7 pounds! 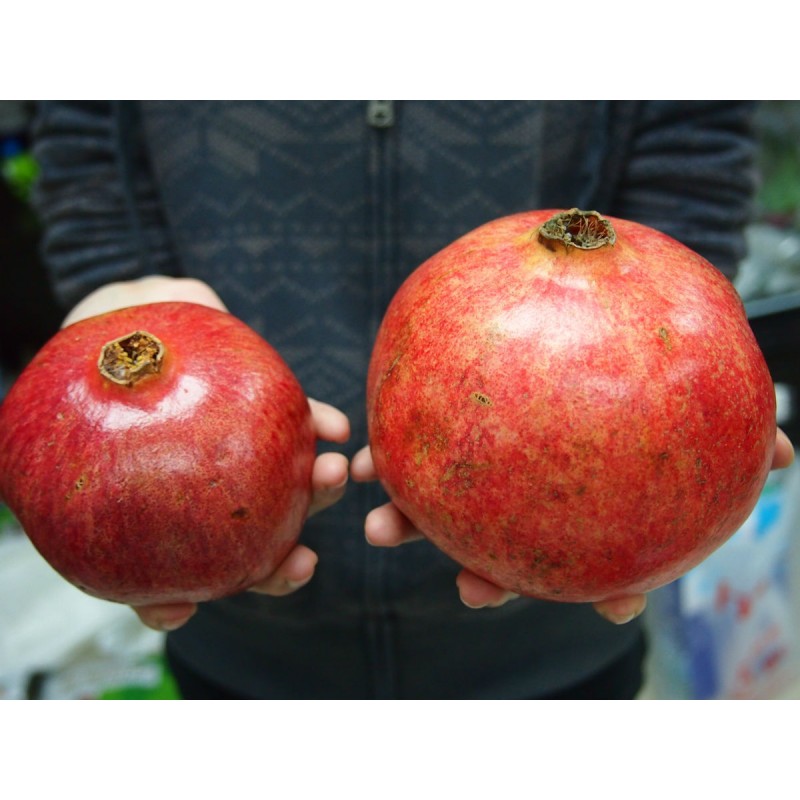 Could you guess how much would an average-sized pomegranate weigh? About 9 ounces. Would you believe us if we said that a Chinese farmer once grew a pomegranate that weighed ten times its average weight? No, we’re not lying.

In 2017, Zhang Yuanpeng, a Chinese farmer, grew a pomegranate that weighed 5.7 pounds (2.6 kilograms)! The fruit was entered in the Guinness Book of World Records as the heaviest pomegranate ever grown.

17. Pomegranates are the national fruit of two Asian countries

You’d be surprised to learn that not one but two Asian countries have declared pomegranates to be their national fruit: Azerbaijan and Iran.

18. Every October, the people of Azerbaijan celebrate the Pomegranate Festival 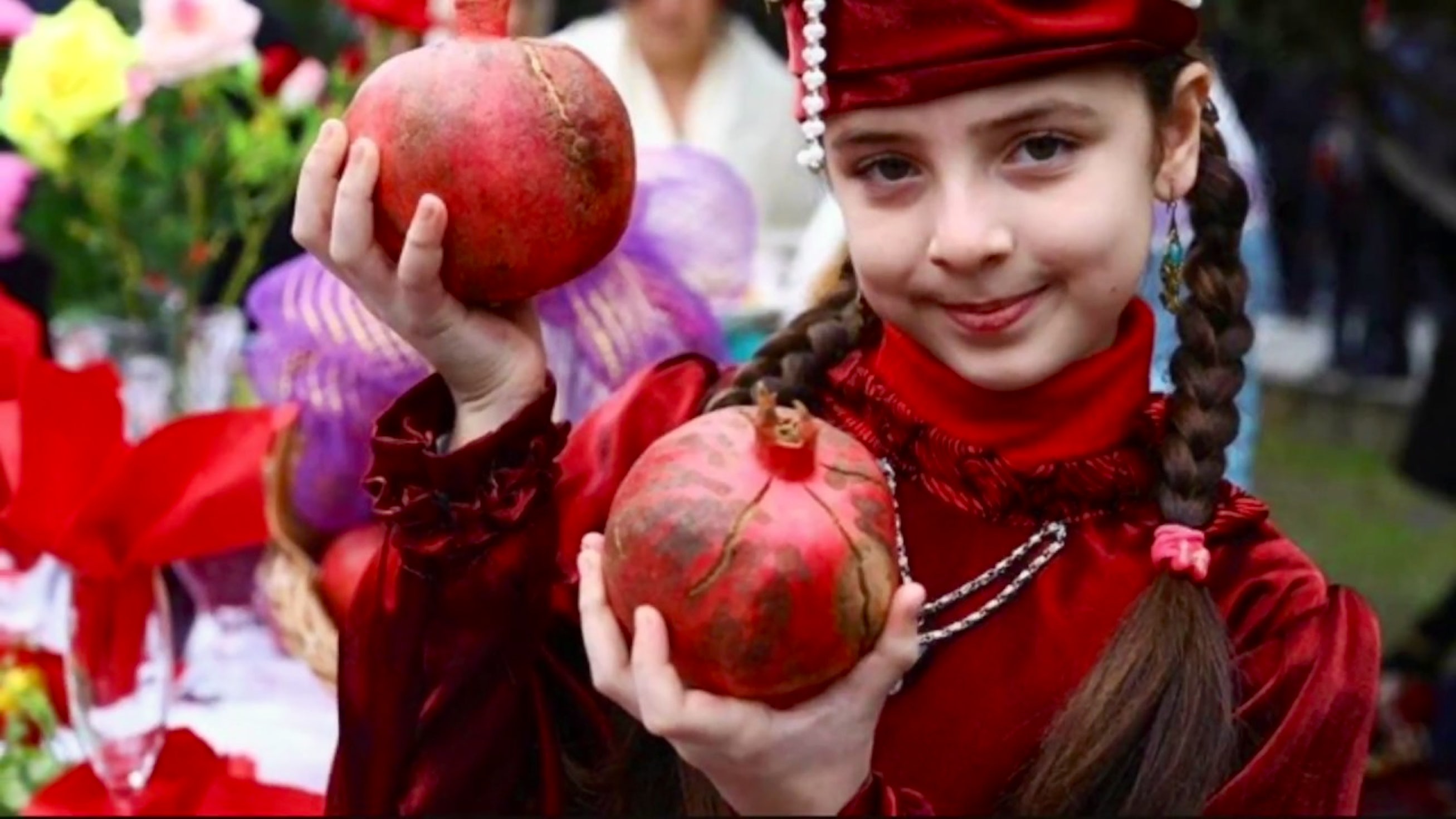 The people of Azerbaijan take their national fruit very seriously, so much so that they hold an elaborate festival to honor this fruit every October. This festival, held in the district of Goychay, is called the Goychay Pomegranate Festival.

The Pomegranate festival here is celebrated with much vigor, music, and dance, wherein you’ll find fancy fairs of all the pomegranate varieties grown in the country as well as their byproducts. Alongside these, you’ll also notice exhibitions of folklore paintings, potteries, sculptures, and other handicrafts.

The Goychay Pomegranate Festival has gained such wide popularity over the years that UNESCO included it in the Representative List of the Intangible Cultural Heritage of Humanity in 2020.

19. A pomegranate was depicted in the official logo of the 2015 European Games

The 2015 European Games were hosted in Baku, Azerbaijan. And because pomegranates are the national fruit of the country, the official logo of this international event was shaped like these fruits!

20. Pomegranates are an important part of the Yalda Night celebration in Iran

We just learned how much significance pomegranates hold to the people of Azerbaijan. But what about the other country that has declared them as their national fruit? Yes, we’re talking about Iran, and you’d be happy to learn that pomegranates are significant in Iranian culture as well.

On Yalda Night, an Iranian festival celebrated on the winter solstice every year, all families in the community come together to feast and read epic poetry. Pomegranates and watermelons are both important parts of this feast, as their color symbolizes the hues of dawn.

21. India is the largest pomegranate-producing country in the world

Among all the countries where pomegranates are cultivated, India takes the lead. This Asian country produces more pomegranates every year than any other country in the world, followed by Iran, China, Turkey, Afghanistan, and Iraq.

22. Iran is the largest exporter of pomegranates in the world

On the list of the largest pomegranate-producing countries in the world, Iran follows India closely, bagging the second position. However, if there’s one area in which Iran has left India behind, it is in the export of this fruit.

Although India produces the maximum number of pomegranates annually, it’s an equally significant consumer of the fruit. On the other hand, the pomegranate export business of Iran is larger and more extensive, making them the leading exporters of these fruits globally.

23. Afghanistan is called “the country of the pomegranate fruit”

Although Afghanistan doesn’t rank as high as India and Iran on the list of the largest pomegranate-producing countries in the world, it is still called the country of the pomegranate fruit.

Wondering why? It is because the diversity of pomegranate varieties that you can find here isn’t found in any other place. Because of this unparalleled variety, the leading botanists of the world believe the country to be the cradle of pomegranate production.

24. Pomegranates were introduced to America in the 16th century!

Pomegranates’ introduction into America was much later than that of the European countries. It was in the 1700s that the Spanish settlers first brought these fruits to the continent.

25. California is the largest pomegranate-producing state in the United States

Many states of the United States – including Texas, Arizona, Utah, Florida, and North Carolina – grow pomegranates. But none of them can match the vast production of California, which is the leading pomegranate-producing state in the country.